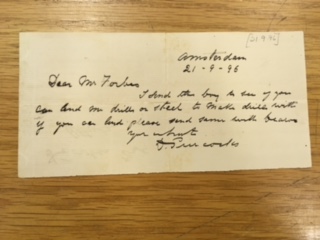 1.  In the context of the thousands of letters that are the concern of the WWW project, the word ‘boy’ has multiple meanings and usages. Over time it came to be one of the most homogenising and diminishing ways to refer to adult men who were black, and it was used ubiquitously in this way during the apartheid years in South Africa, with ‘maid’ having some similar reverberations for women. Over time, these words came to be perhaps the most negatively important signifiers of racialising and its diminishment  of full personhood. But in the case of ‘boy’ it was not always so. Indeed, the use of the word to describe or rather to characterise categories of people had fairly innocent beginnings.

2.  In the early days of diamond mining, chiefs started sending age regiments to the diamond fields to earn money in particular to be able to purchase guns and ammunition. The Swazi King, for instance, in the mid 1870s sent a regiment of boys of around 12 to 14 years old, who stopped off at Athole en route to the place that became Kimberley, with some 300 of them being cooked a meal by Kate Forbes, determined they would have a least one decent meal while away – that they would eat ‘as much as they can stow away’. This sending of pre-initiation boys was at the time a widespread practice and is one of the points of origin of the use of ‘boy’ to characterise male workers of African heritage.

3.  When the telegraph came to the New Scotland area and a telegraph office was set up in New Amsterdam, the nearest local town, the Forbes were frequent users of this new rapid communications technology. But their farm and those of other family members were some miles from the town and there were sometimes delays in receiving telegrams (dispatching was done by sending one of their own workers from the farm to the town), which at points caused business difficulties for them. The telegraph office suggested a solution, that the Forbes should arrange with one of the young boys who hung around the streets and offices in Amsterdam that he would deliver their telegrams. The manager would provide ‘daily grub’ and the Forbes a payment on receipt. White dorps and towns were bustling and attractive to many local African youth, some of whom congregated there. In the case of delivering the telegrams, in particular a ‘young boy’ is mentioned as suitable for this task, for older ones would be unable to avoid the work activities that their chiefs specified for boys of particular ages and could not ‘hang around’ in the way he comments. This is another point of origin at which young African males were drawn into quasi-labour market relations, for of course neither the attractions of New Amsterdam nor the requirements of the Forbes were unique.

4.  But eventually ‘boy’ lost its innocence, and this happened fairly rapidly. ‘Innocent’ usage is found in the earlier years of Forbes letter-writing, but by the middle and later 1890s its homogenising and diminishing connotations have come to the fore. In this context, it is interesting to consider the short letter shown at the start and transcribed below, written by Vin (Vincent) Purcocks, in 1896 a store-owner in Amsterdam, to his brother-in-law David Forbes.

This concerns the flourishing exchanges of goods and services that occurred between the Forbes and other family connections in the New Scotland area, in this case regarding the drills used in joinery and other activities. ‘Young boy’ regarding the delivering of telegrams spells out that young boys are indeed being referred to; but is the boy in Purcocks’ request an actual boy or is this the later and objectionable usage?

5.  There are many such references concerning other kinds of activities, including the borrowing of oxen, rams, cartloads of mealies (corn) and so on in the Forbes letters. In all such cases, context has to be taken into account. This involves not only taking the whole of the letter in question into consideration, but also the characteristics of letter-writing by the particular person sending the letter.

6. In the case of Vin Purcocks and his letters, on many occasions it is clear that he is being dismissive or even contemptuous, and because of this, interpretation of this particular example sees his ‘boy’ reference as probably actually referring to a grown man. This casual usage of dismissive terms relates in significant part to his earlier involvement in mining activities, both in the Kimberley diamond fields and also later at Barberton looking for gold and in Swaziland for minerals. Working cheek by jowl with American miners and hearing their racial/racist terms, for many white miners ‘boy’ and ‘nigger’ became connected, although the latter word remained largely confined within mining circles and did not achieve wider currency in South Africa. Tracking the uses of these words in the WWW letters indicates that where people were familiar with or involved with mining, they were much more likely to use such terms.