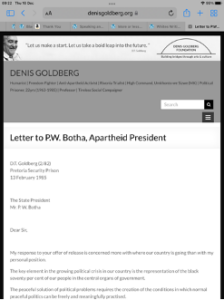 1. Denis Goldberg was one of the Rivonia trialists, together with Nelson Mandela and Albert Sisulu. He was in prison for some 22 years and released in 1985. The website of the charity he founded, shown above, has much interesting information and discussion on it. It repays an attentive visit for anyone interested in the times, the places and the people who made change in South Africa possible.

2. The screenshot opening this Trace comes from the website and it shows the start of a letter, a statement, a demand, a manifesto… It is a transcript of an original document, and Goldberg himself refers to it fairly near its end as a memorandum. It could be classified in various ways, and its entire text will be found at the end of this discussion for present readers to peruse.

3. The context was that release had been offered to some political prisoners – at a price. Change and the possibility of yet more change was in the air. Things were on the move. This document was Goldberg’s response to such an overture to himself, a response which appears under his name and also as though a personal letter from named person addressed to another. But clearly he is writing on behalf of a collectivity and addressing the document to another collectivity, which Botha headed as President of South Africa. Goldberg, in a Pretoria prison, comments that he was not allowed to communicate with other key people, the ANC leadership on Robben Island in particular. But at a guess there were ways and means by which some sense of what was happening got through even if not specifics.

5. Thinking about its content reveals a number of interesting aspects which throw light on what kind of document it is.

6. The letter/memorandum starts with a lengthy statement of the points being made, and having done this it then explains that it was a kind of summary and some of the points would will be dealt with in what is to follow in more detail. It is a document that the reader/addressee is to learn from, through having the main points of the argument put twice in slightly different ways. In effect, Goldberg is acting as an instructor, in pointing out the consequences of various actions or inactions to Botha and the wider political audience that stood behind him. And it is worth noting that he also disavowals making a personal response, he is concerned instead with “where our country is going,“ not his own individual position.

7. This sense of Goldberg as an instructor and also as the person with the moral authority comes across in addition in the tone of the document, for there is no sense at all that he is a supplicant, a prisoner, writing to a person who has ultimate authority over his treatment and how much of his sentence he would serve. Goldberg is the person with authority, he is the person who explains the pros and cons, the consequences, of political activities and decisions. He also points out the massive contradictions of the political viewpoint that Botha stands for, that it makes more likely the very thing that it fears, it makes more likely bloodshed rather than less. And Goldberg also points out what democracy actually means and entails, and that it is actually the ANC and others who represent it, not the apartheid government.

8. Moral authority as well as political authority belongs to the writer, the excellent Denis Goldberg.

9. And what of whiteness? The first thing to observe is that Denis Goldberg was white and in a very high position within the ANC opposition to apartheid, like others. This was a time when the movement had the sense of a rainbow nation in the making. The second thing to observe is that these were hard times indeed, but there was the promise and the possibility. They wouldn’t get much truck now.