Please reference as: Liz Stanley (2020) ‘The Transvaal pass system, 1880’ www.whiteswritingwhiteness.ed.ac.uk/Traces/Transvaal-pass-1880/ and provide the paragraph number as appropriate when quoting. 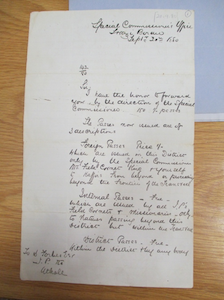 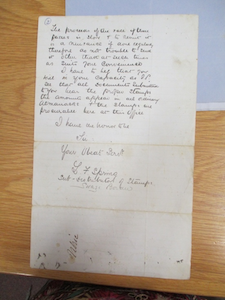 I have the honour to forward you – by the direction of the Special Commissioner – 150 1/- passes
The Passes now issued are of 3 descriptions
Foreign Passes – Price 1/-
Which are issued in this District only by the Special Commissioner the Field Cornet Mr King & yourself to Kaffirs from beyond or proceeding beyond the frontier of the Transvaal.
Internal Passes – Free –
Which are issued by all J.P.s Fields Cornets & Missionaries – only to Natives passing beyond this District but within the Transvaal.
District Passes – Free –
Within the District & by any body

I have to beg that you will in your capacity as J.P. see that all Documents Submitted to you bear the proper stamps the amounts appear in all ordinary Almanacks & the stamps are procurable at this Office

I have the honour to be
Sir
Your Obeat Servt
L. F. Spring
Sub-Distributor of Stamps
Swazi Border

2. The pass and its regulatory context

2.1 ‘The pass’ as a means of regulating and constraining the presence and absence of black people has become synonymous with segregation and apartheid and with the period from 1948 National Party election victory up to the ending of pass legislation in 1986. However, this is to fetter its existence to a particular time-period and thereby to limit its meaning. In fact the existence of passes, indeed the existence of a pass system, exceeds this at both ends of the spectrum. Passes have a long history from well before the later 1940s, and in the shape of identity documents and associated regulatory categorisations of people have a postmortem existence too.

2.2 Passes are important in their own right because they were so instrumental in governance, regulation, constraint and also punishment. In the form of the pass system, the pass was one of the foundational features of racialisation and its regulation over time, together with the contract, the location, the sign. People, land, labour, material existence, were all conscripted. People, that is, of a particular kind, land of a particular quality, labour of a particular hue, material existence for some. But earlier, things were different although beginning to take shape. Systems existed, but were patchy, deferred in the different colonial states, changed over time, happenstance brought variations, infringements were frequent on both sides. They did things differently, what happened around 1880 is not the same as what happened between 1948 and 1986.

2.3 Discussion here focuses on the year 1880 in the Transvaal, when following its annexation by Britain a pass system was introduced.

3.1 Britain annexed the Transvaal in 1877. In 1878/9, a British Commission delineated the Transvaal/Swaziland border, and in an official sense this was accepted and ratified by the Swazi king, Umbandeni [Mbandzeni], in March 1880.

3.2 While in practice the border remained porous, still there were increased formalities of a range of kinds, in particular in relation to movements of people across the border for labour purposes. The above letter from LF Spring to David Forbes snr was written in this context.

3.3 The Forbes family included David Forbes senior and his wife Kate and children Nellie, Alex jnr, Dave jnr, Madge, Jim jnr and Kitty, and also his younger brother James snr and elder brother Alexander snr. In Swaziland terms, James snr was the most significant figure as a mining prospector and wheeler and dealer in land rights, followed by Dave jnr, who was fully bilingual and had many Swaziland contacts and later became a Swazi coal mine manager. In Transvaal terms, David Forbes snr, who had arrived in South Africa as a Scottish migrant in 1850, was a significant figure as a major landholder, a prospector and mine owner, an entrepreneur with a company floated on the international share market, and involved in many other economic ventures.

3.4 The Special Commissioner’s Office was located at the Swazi/Transvaal border, not far from the Athole farming estate owned by the Forbes, who had many dealings with the Border officials, and increasingly so as the Forbes sons grew up and developed close relationships with various members of the Swaziland royal families and particularly the Queens Regent and the senior councillors to Umbandeni. The Swazi king had earlier been a minor and the Regents the most powerful presence in the kingdom. In the period of what amounted to land grabs in Swaziland in hopes of mineral discoveries and particularly gold, the Forbes played a part, in search of mineral-rich land and also as members of the appointed committee of white miners who attempted to bring order alongside the Swazi power structures with the tumultuous circumstances of the mass arrival of white speculators and miners, and as confidents of the Queens Regent.

4. The text and the passes

4.1 What Spring’s letter is concerned with is not just the introduction of passes, but a pass system that seems to have been intended to govern all movements of people: across the border, between the different areas of Swaziland, and within a district. It states with confidence that ‘The passes now issued are of 3 descriptions’, foreign, internal, district, but alas no examples accompany the letter in the archive collection; and while there are many passes in its miscellaneous boxes, these are of a different kind. They are much more informal and are of the third kind referred to by Spring, rather than the more formal foreign and internal passes. The examples that remain are, as the letter states, by ‘any body‘, and notes about permissions scrawled on what are often small scraps of paper, and will be discussed in a separate Trace.

4.2 Spring’s letter indicates that an administrative apparatus existed around who issued the passes and also the official stamps that were to be placed on these to indicate proper compliance. Presumably the first two kinds of passes would have had the printed headings indicating information to be recorded, and the letter indicates there were particular categories of people who were authorised to sign these. Regarding the more general and routine movements of people, Spring‘s letter says that passes for this purpose can be issued by ‘any body’, although it does not mean this literally, and there is a silent and in brackets ‘[white]’ attached to his statement which he assumes will be read and heard by the addressee. While official and ‘proper’, when it comes to the sign off there is something slightly ridiculous here, with Spring being the ‘sub-distributor of stamps’, which sounds like a dogsbody job but given a grandiose title as a ‘sub’, not even the actual distributor.

4.3 The Transvaal, bankrupt, had been annexed by Britain in the late 1870s, while later it wanted and fought successfully for independence, which came following the so-called ‘First War of Freedom’ in 1882. David Forbes senior had been an associate of the Transvaal’s first president, Pretorius, and with his uncle by marriage Alexander McCorkindale had obtained many farm areas via Pretorius wanting to open the Transvaal to a wider white presence.

4.4 The second page of Spring‘s letter indicates clearly that raising revenue was not the purpose of the introduction of the three-fold pass system, that collecting the money and remitting it was a nuisance, but that it had to be done as part of the duties of a JP and the other authorised persons identified by Spring. But in spite of this, the correct value of the stamp to be placed on the pass to certificate its authenticity in the case of the first two kinds of pass was, he indicates, printed in all Almanacs, that is calendars that also provided a range of basic official information. The revenue was irrelevant, the system was a nuisance, but the activity was important enough to be printed in official information sources. Its importance lay, consequently, in the apparatus of requirement, certification, authorisation and completion of the administrative and bureaucratic requirement, directed towards information-gathering about and regulation of movements of people. And is this concerning the movements of some people or all people?

4.5 In Spring‘s letter, the first category of foreign passes, which cost 1/-, is specified as concerning the movements of ‘Kaffirs’, a term which at the time did not have a particularly racist connotation although it most certainly does now. It is likely that Spring was using it to mean people who were Xhosa or perhaps any black person from outwith the Transvaal. Regarding the second category of pass, which was available free, Spring’s description of it is directed towards ‘Natives’, which term he appears to be using in two overlapping senses. One is to indicate that they were black and so the contrast is within an unarticulated ‘European’ or ‘white’; while the second implies that they were native to the Transvaal, that they belonged there and presumptively that is why they did not need to pay for a pass. Interestingly, the third kind of pass, the district pass, does not have a category of people specified requiring this, because tacitly it was obvious to Spring and his addressee and did not need to be explicitly stated.

5.1 Resentment about the British annexation increased not least because of its imperial expansionism more generally in southern Africa. The so-called First War of Freedom or first Boer War between the Transvaal and the British imperial presence started in December 1880 and ended in March 1881. The Pretoria Convention was ratified in October 1881 by the Transvaal Volksraad. This did not fully reinstate Transvaal independence but kept it under British suzerainty. In 1884, the Pretoria Convention was superseded by the London Convention which gave full independence and self-government, although still with some British control of foreign relations. It also gave guarantees of Swaziland independence. But soon the Transvaal cast its eye on Swaziland and sought to extend its existing interest into annexation and control including by re-negotiating the border.

5.2 What of the pass system as in Spring’s letter?

5.3 The Boer Voortrekkers took a kind of pass system with them when they went to Natal and Transvaal. In 1866 a Transvaal Pass law was passed, where any black person outside an allowed area without a pass from an employer, magistrate, missionary, field cornet or chief could be arrested. In 1870 ‘Shilling Passes’ had to be signed by an employer or chief, mainly regarding movements to the diamond fields. In 1875, a pass to go to the Free State costing £2 had to be signed by a Free State official or an employer. In 1877 Britain relaxed the Transvaal pass laws. The 1880 system with its increased regulatory intent is not widely known; and while passes most certainly continued to exist in the Transvaal, there are only the scrappy ‘any body’ signed examples in the collections worked on in WWW research up to the time of day South African War 1899–1902, so its fate as a system is a matter for further investigation.

Smalberger, J.M., 1976. The role of the diamond-mining industry in the development of the pass-law system in South Africa. The International Journal of African Historical Studies, 9(3), pp.419-434.