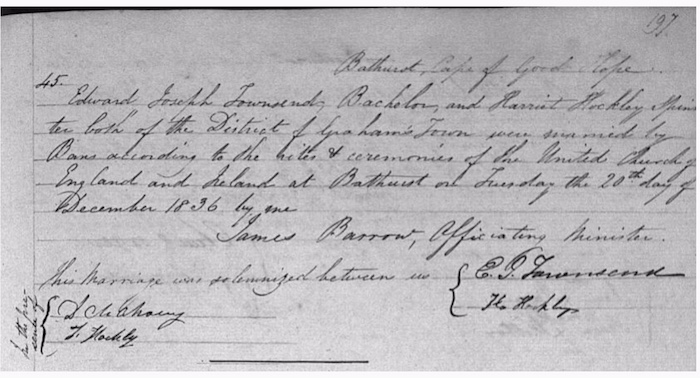 1. The marriage of Edward Townsend and Harriet Hockly took place on Tuesday 20 December 1836 in Bathurst, near Grahamstown, Eastern Cape. Its certification is shown above, taken from the local register of marriages, births and deaths. A full transcript of the record is provided below.

2. Two of the Townsend brothers, John and Edward, left Britain for the Cape in the later 1820s. Edward Townsend’s family had mainly remained in Britain. However, older brother John was running part of the family business of silversmithing and jewellery-making in Cape Town, while Edward was sent from Cape Town to establish a shop in Grahamstown. Their elder brother William ran the London centre to the business.

3. Harriet Hockly’s family had arrived in the Eastern Cape as 1820 Settlers. Her father Daniel, was a silversmith whose pieces are still in demand. Harriet’s family background was jewellery (and a jewellery shop) on her mother Elizabeth Moore’s side as well. In 1836 Daniel had not long died, and the widowed Elizabeth and her younger children, as well as Harriet herself, were living in Grahamstown. However, the Hocklys had all earlier lived in Bathurst, some 25 miles away.

4. What does scrutiny of the Townsend/Hockly marriage record bring into view? The transcript of the entry is:

45
Edward Joseph Townsend, Bachelor, and Harriet Hockley spinster both of the District of Grahamstown were married by Bans according to the rites & ceremonies of the United Church of England and Ireland at Bathurst on Tuesday the 20th day of December 1836 by me
James Barrow, Officiating Minister

This marriage was solemnised between us

5. 197/ 47 These numbers refer to the church Register – 197 is the page number, 47 is the entry number, referring to the number of marriages, births and deaths recorded that year up to 20 December.

6. Bathurst Bathurst was at this time undergoing a change of name, being earlier referred to as Theopolis, with the mission station established there its prime feature initially, and it was an administrative hub until 1822/3. By 1836, Bathurst was growing and changing, as were all the frontier towns in the Eastern Cape, although it remained a centre for some formal activities associated with its earlier role as a religious centre. In 1835, Bathurst had been devastated during the Frontier War of that period, although rebuilding quickly commenced. In 1836, James Barrow had been confirmed as Rector of a new church still being built, St John the Evangelist. The register with the marriage in is now part of its records.

7. Edward Townsend What comes across from the family letters that are extant is that Edward was an unsatisfactory and rather feckless person. His brother John seems to have soon dispatched him to Grahamstown, with fairly angry comments following; later his brother William, both in letters and when visiting South Africa to check on but different elements of the business, found his business practices highly unsatisfactory. William favoured Harriet instead and wanted her to be in charge of the Grahamstown shop, which sold high-end jewellery as well as other items. Clueless is perhaps a more appropriate word for Edward, who had frail health, suffered from what seems to have been depression, and talked about wanting to be a missionary but, as was pointed out to him, he had never done anything practical to demonstrate his faith and a calling.

8. The Townsends had two children and Harriet was pregnant with third when a strange coincidence occurred. Edward had agreed to ‘discount a bill’ presented by a customer. This in effect meant he had handed over a significant sum of money for a bill which might or might not be paid at a future date; a family business connection informed him by letter that the signatory had defaulted; and the same day or that following Edward suddenly died on 4 August 1840. Edward seems to have had heart problems or something similar, so possibly the shock of impending penury precipitated a heart attack or stroke. But there is also the possibility that he might have taken his own life, although there is no evidence about this so it remains mere speculation.

9. Harriet Hockly Harriet Hockly came from redoubtable families of women on both sides of her parentage. On her mother’s side, the Moores ran a jewellery business and also bought and rented property, with the women as involved in this as the men. On her father’s side, the Hocklys were a skilled artisanal family and a number of Daniel’s sisters were involved in business throughout their life courses. After her father’s death and as the second oldest child, it is likely she would have supported her mother’s business ventures, including making and selling fashion hats and running a school for younger children.

10. Harriet had been very involved in running the Grahamstown shop before Edwards’s death and in spite of her three pregnancies in a short space of time. Her mother’s advice was to abandon the shop, live with her and then run a school. But Harriet received different advice from business connections William Townsend, John Maskell and John Blore: make use of her solid social connections, the business and customer links she had built up, and her commendable abilities in running the business and keeping its books efficiently. She combined elements of both, removing with her mother and younger siblings to Cradock; but running a shop there, with a very large outreach aspect to it, making use of social and religious connections in involving women friends as outworkers and also customers, and selling many items through a delivery service operated by the same means as well as via the shop. She built up an extremely large turnover, albeit with some difficulties. In 1849 she remarried, to one of the richest land-owners in the area, the widower Dods Pringle.

11. Hockley / Hockly Two variants of the Hockly name appear in the document. Whoever wrote the record spells it with an ‘e’. However, both Harriet herself and also the second witness write it as Hockly. However, on other occasions family members too write it with an ‘e’. This indicates, not mistakes, but that spellings were still often done phonetically, although settled spellings were becoming more usual.

12. United Church The United Church was a kind of consortium of Protestant denominations, usually those of nonconformity rather than the Church of England. Unitarians, Congregationalists and Methodists were the mainstays in the Eastern Cape at this time, banding together in part to ensure there were places of worship and suitable ministers available, in part in response to the presence of many through their employment by the London Missionary Society, a non-denominational body whose missionaries might come from across the spectrum of Protestantism.

13. The United Church Bathurst Why did Edward Townsend and Harriet Hockly, who seem both to have been living in Grahamstown at the time, marry in the United Church in Bathurst? There is no definite information about this, but a likely possibility is that Harriet, who seems to have been a devout life-long Wesleyan, had established a connection with the United Church minister there, James Barrow, when her family were living in Bathurst. Certainly later she expressed great pleasure that the Grahamstown Wesleyan John Munro was appointed to replace George Barker in Cradock at around that time she moved there in 1841, suggesting that she built up personal relationships with the ministers she followed.

14. James Barrow James Barrow acted as officiant in Bathurst for a lengthy period and was later ordained as Rector for the new church built during the Frontier War, St John the Evangelist.

15. Witnesses It is legally required to have two witnesses to the formalities of marriage. What is interesting is that in this case they did not include Harriet’s mother, Elizabeth Hockly. However, the witnesses were Harriet’s brother-in-law and one of her sisters.

16. D. Mahony The eldest Hockly daughter Elizabeth married Daniel Mahony in 1832. It was he who acted as the first witness. Mahony worked as a factor offering a range of services and was employed by Elizabeth Hockly to carry out work in renting and repairing property she bought and sold to raise income, later doing the same thing on a much larger scale for major land-owner Dods Pringle.

17. F. Hockly Frances Hockly, known as Fanny, was a younger sister of Harriet’s. She was born during the 1820 passage from Britain to South Africa and her middle name, Chapman, is that of the ship concerned. She married the Wesleyan LMS missionary William Ross in 1849 and they later undertook missionary work in a number of places including at Kuruman under the Moffats.

18. Whiteness Whiteness is notable for its absence in any immediately apparent sense. There is no certain sign of the Cape context, this could be a provincial wedding in, say, middle England. But around and behind this marriage certificate is a much more complex world.

19. The sixth Frontier War (1834-9), more skirmishes and raids than set-piece battles, was still rumbling on and during this much of Bathurst had been burned, including the church then being built. Slavery had been abolished across the British Empire, to the dissatisfaction of most of the Boer inhabitants and some of the English-speaking in South Africa and the situation of many black people was being commuted to indentured labour, including in Bathurst, Grahamstown and Cradock. And by the middle 1830s and in spite of colonial policies designed to keep Eastern Cape white and black apart, there were already locations housing both African and mixed race people living on the outskirts of most of the frontier towns, who provided services of various kinds for the white inhabitants of these.

20. What is there in the register entry and what is not? Most of what appears under the headings above can be derived from the short seemingly bland entry in the register, with the exception being the detailed comments about Edward Townsend and Harriet Hockly, which are derived from letters and other papers and part of an archival collection. The other comments provided relate directly to the words in the entry themselves and the information they convey, and then various of what is recorded in the register have been treated as springboards, by ‘following one’s nose’ (as discussed in a blog on this). That is, they have been used as jumping off points to look for other, more detailed relevant information. In this sense, anyone could amass much the same information and piece it together in a jigsaw-like fashion.

21. What could not be accessed like this are the contents of the relevant archival collection, the uncatalogued Pringle Papers. But of course, that is what WWW research is for, to make this discoverable.