The rings of Umquaka and Nellie: two 1880s photographs

Please reference as: Liz Stanley (2017) ‘The rings of Umquaka and Nellie: two 1880s photographs’ http://www.whiteswritingwhiteness.ed.ac.uk/Traces/The-rings-of-Umquaka-and-Nellie/ and provide the paragraph number as appropriate when quoting.

1  Two photographs are shown in what follows. Neither of them can be firmly dated, although they can be placed approximately in time and also in relation to each other. They are linked because showing young women from the same household. Also, while they represent many things as part of each photograph, one thing in particular that they show acts, as Roland Barthes’ influential Camera Lucida has it, as a punctum, as a point of focus, as something that draws the mind as well as the eye and is puzzled over. 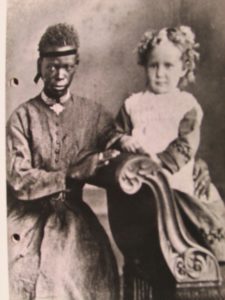 2  The first photograph shows a young woman, Umquaka, who was the nursemaid of the Forbes children and then over many years worked as a general factotum in the Forbes household on their farm-estate Athole, in the Eastern Transvaal. She is shown in this photograph with her charge, Madge aka Maggie, the youngest Forbes daughter. The photograph was probably taken in around 1880, with Madge Forbes having been born in 1875; and it was most likely taken on a family trip from the farm to Durban, where there was one of the then-few photographic studios, although the photograph itself provides no such clues on its rear-side. Umquaka was a definite ‘presence’ and a force to be reckoned with. For instance, on his various trading trips away from the farm, one of David Forbes’s constant concerns was with buying presents in the shape of shoes, dresses and boxes of sweets that would meet her approval. She was also ‘respectably’ married and later had two or three children.

3  In this photograph Umquaka is dressed in considerable finery and wearing a ring on her left hand, which is protectively encircling Madge. However, it is not on the conventional ring finger but her middle finger. Going by the probable age of Madge, it is likely that Umquaka was married when this photograph was taken. Had the convention of the ring finger being used to indicate a woman being bound to a man not yet taken off among Christianised Swazis? Did perhaps the middle finger have a symbolism in its own right? Or was perhaps Umquaka not yet then married and with the ring being a token of something else? The Forbes letters and diaries offer no clues, and the puzzle of the punctum of this photograph remains intact.

4  The second photograph also shows a young woman. This is Nellie (Helena Ann), the eldest child of the Forbes, who was born in 1860. This photograph is one of the most personal items about Nellie Forbes in the entire collection, and it and a couple of others in which she is present tell more about her than the many thousands of letters and even larger quantities of diary entries in which she remains a shadowy presence. There is in fact considerably more about Umquaka and her doings and her close bonds with all of the younger Forbes siblings in the collection, although only one item is actually by her. And there is not that much more that is by Nellie either.

5  This second photograph too is undated but was possibly taken in around 1884 in Edinburgh, where Nellie was on a visit with her parents and her younger sisters. She too is wearing a ring on her left hand – and precisely on the conventional ring finger, while close scrutiny of the photograph under magnification shows that as well as what looks like a wedding ring she is also wearing a keeper ring, akin to an engagement ring. However, Nellie never married, there is never mention of any such possibility in relation to her; and later, as her parents aged, she ran considerable areas of the home farm at Athole (as distinct from the wider farm-estate). So why was Nellie wearing the equivalent of a wedding and an engagement ring? For rings to have been worn like this by a respectable unmarried young woman suggests a public declaration of some kind. But of what kind? Had Nellie perhaps loved and lost, and wore these rings to signify a bond that was not dissolved? Or perhaps she wore them in affectation? Or perhaps doing so signified nothing very much but that they fitted the finger in question. Again, the Forbes letters and diaries provides no information about this and the puzzle remains. There is a small tantalising hint in a letter from Nellie to her brother Jim that their parents did not really understand love, but what this means or if it is connected remains unknown and unknowable, although it is known that Jim had serious ‘troubles’in his marriage.

6  Are these rings to be seen as binding Umquaka and Nellie? If so, in what ways and with whom? And why is the ring unconventionally worn by Umquaka and, even more unconventionally, why are the two rings worn at all by Nellie? In case any readers are wondering, the photographs have been reproduced in these prints of them ‘reversed’, with the rings indeed being on their left hands. And beyond the matter of the rings, thinking about these two photographs together suggests perhaps that Umquaka looks wary, Nellie looks commanding; both are resplendently dressed, with Umquaka more informally and Nellie more formally attired; and that Umquaka is at work and a worker as shown by the presence of Madge, while Nellie is on show. But these readings are not science. They are matters of conjecture based on the slim evidence of how eyes now read these two depicted scenes and the figures in these landscapes from 140 years ago, and open to contrary readings using the same evidential basis.

7  These photographs are, then, less portals leading into a greater ability to read and to place these two young women and their lives than acting as closed doors of a ‘come this far and no further’ kind. Indeed, for all the rhetoric around it, this is perhaps the point of Barthes’ punctum, that it is a sign portending mystery, a point around which to think and to wonder and conjecture, but not to conclude.