Please reference as: Liz Stanley (2017) ‘”The Kafir would not go with me…”’ http://www.whiteswritingwhiteness.ed.ac.uk/Traces/The-Kafir-would-not-go-with-me/ and provide the paragraph number as appropriate when quoting. 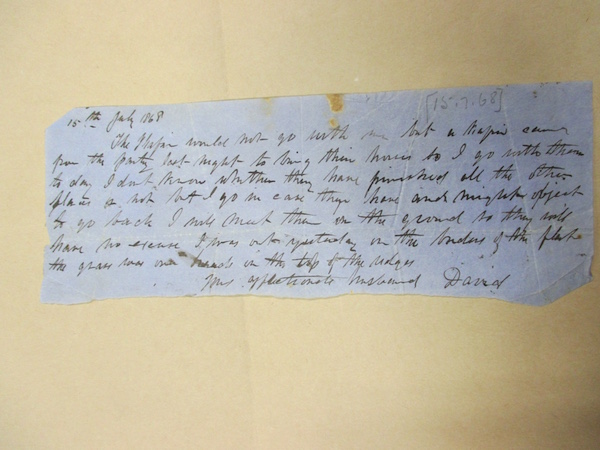 1. This is a note dated 15 July 1868, written by David Forbes to his wife Kate Forbes. She was at home running their farm in Natal, and he was away with Kate’s uncle Alexander McCorkindale, as part of setting up a new farming community in the area of the Eastern Transvaal known at the time as New Scotland. It is transcribed below. It caught the eye because of its bright blue paper, because on a torn off piece of paper, because written neatly although with no punctuation, because its content is seemingly mundane and uninteresting but actually explosive.

2. It is definitely a note and not letter, for other missives written by David Forbes whenever he was away are typically very long and provide great detail on his daily activities and have a formal mode of address as well as a sign-off. So why was this written, and written in the way it was?

3. For a reader now, at first sight its content is simply that Forbes was not with the rest of his group and wanted something about a plan to be confirmed by them. But its content must have been thought important enough that he wanted to convey it to Kate Forbes as soon as possible, thus his note. What clues are there about this? And about the horses and the man refusing to go with him? Also about why anyone might want to object to the plan referred to? And what is meant by ‘the ground’?

4. There is no personal address at the start or indeed anywhere in this note, but there is a sign-off and it is this that tells the reader that the addressee was Kate Forbes. The sign-off is also an unusual one, as he usually finishes with ‘Your affectionate husband David Forbes’, not just ‘David’. Had he perhaps run out paper, for the ‘David’ is written at the right-hand edge of the sheet? Was it that, because he was in a hurry, he finished in a less formalised way? Was it perhaps that the note was written to be enclosed with a letter that was about to be posted, so it was an addendum, a kind of PS, which added this information to his main letter?

5. There are many questions that can be asked about the content of this short note, and these help raise important matters concerning changing relations between black and white in southern Africa during the 1860s. Not all of them can be answered.

6. Its opening  is actually a very shouty one, for it tells the reader that ‘the Kaffir’ would not agree to go with David Forbes to somewhere, while ‘a Kaffir’ brought some horses from Forbes’ party, which he was for some reason separated from, and this enabled him to go with them. While his usage here might refer to ethnic categories and descriptors, this is nonetheless an entirely instrumental way to refer to the people concerned. They are in effect present in this opening sentence of the note just as mechanisms – bald categories – which prevent or enable a desired activity, and not as people as such. Implicitly, however, they are both men, because the words are not marked by gender, and because the category-holders concerned are out and about doing things with horses etc.

7. The elliptical references continue, something that is a characteristic of the note as a form or genre of epistolarity more widely. What does “finishing all the other plans” mean, who are “they”, why might there be an objection to whatever it was that DF was proposing, and what does “any excuse” imply? Although these questions are raised by the content of the note, there is little in it which enables answering them and pinning down what is meant. It is the wider context and knowledge about this which provides the information necessary.

8. “The plans” were in fact plans produced by a surveyor and were of parcels of land for perspective farms that the then-President of the Transvaal, Pretorius, was negotiating to be purchased by Alexander McCorkindale, Kate Forbes’ uncle by marriage and something of a wheeler-dealer. David Forbes was intending to purchase some of these land-parcels himself and was concerned to pick choice land. “They” refers to the surveying party, which included President Pretorius, McCorkindale and various surveyors; and that “they” might have finished the plans would clearly be consequential for David Forbes’ own strategising.

9. What remains unclear is why Forbes was not with the rest of the party, nor why the man referred to as “the Kafir” would not go with him. However, Forbes’s intention to be present on “the ground” – that is, the land in question – when the party arrived implies out-manoeuvering in the sense of ensuring that they would have to consider his plan. The relevance of the comment in his note about the height of the grass on the ridges is clear once the fact that this is all about land, and the best land that could be got, comes into view.

10. The metaphor of figure/ground is helpful in thinking about the note. The figure that immediately comes into view is that of David Forbes and his instrumentalism, with regards to “the Kafir” who wouldn’t do what he wanted and “a Kafir” who did, and the urgency of this for ensuring that he would get the land he wanted. The news of the moment that he wanted to convey to Kate Forbes was that this was still in frame and that he had reached a point where he was ensuring he got what they wanted.

11. The idea of figure/ground can be extended. The ground here, the background, is the land in the literal as well as figurative sense. What this note gives witness to is an 1868 land-grab, the usurpation of rights over the land by members of the white settler colonial community who  through their elected and appointed members saw the Transvaal as in effect empty ground that could legally come under their ownership and disposition. New Scotland, as the area of these parcels of farms was known for a few decades, became not only an area of settler farms but also the site of a system of increasing but asymmetrical interdependence, of white farmers on black labour, and of disppropriated black people on wage labour.

12. But there is also the middle ground, and this too needs to be kept in mind, not just the polarities. “The Kafir would not…” importantly sums what needs to be seen here. This was a period of time in which most black people in the Transvaal (and also more generally) still lived largely separate lives, and although they were certainly affected by, to a significant extent remained independent of, the white incomers. At this time-point, for some people, in some places, instrumentalism was still a two-way deal. The man would not go with David Forbes. Forbes had to go around the man to produce the result he wanted.