Please reference as: Liz Stanley (2017) ‘‘Send the coolie on′ http://www.whiteswritingwhiteness.ed.ac.uk/Traces/Send-the-coolie-on/ and provide the paragraph number as appropriate when quoting. 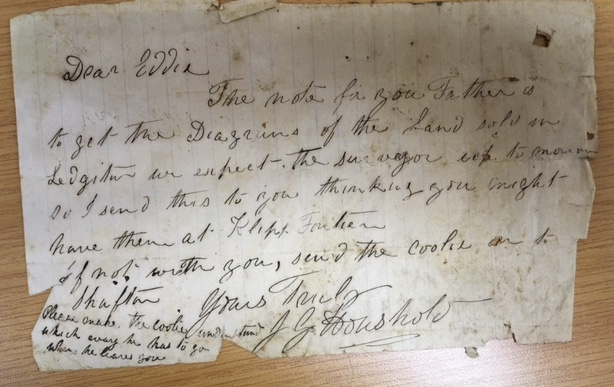 1. This short rather scrappy letter was sent to Edward Parkinson, known as Eddie or Eddy. It is very much to the point, contains no extraneous comments or spare information, and a transcription of it appears below. It is undated but was written in 1889 (information source is the ‘unknown hand’ of either a family member or an archivist) and certainly before the 1895 death of Eddie’s father. Edwin Parkinson (before migration a well-to-do apothecary) and his wife Mary had arrived in Natal as paying cabin passengers in 1851 and subsequently bought a number of farms in the Lion’s River area close to Howick, which is north of Pietermaritzburg, amalgamating various of them under the name of Shafton Grange. Eddie was their eldest son and one of seven surviving children.

2. The concern of the letter is with the measuring or surveying of land, with a view to ensuring the legal right to its ownership by the Parkinsons. ‘Ledgiton’ (Lidgetton) is a small local town a little further from Howick than Lion’s River. The ‘Diagrams’ referred to were the equivalent of present-day plans but less detailed, and these were registered along with written proof of purchase or another basis of ownership such as government grant. They were crucial in proving ownership of land and its boundaries (marked by beacons that owners erected and maintained) when any later sale of property took place. Its writer, Mr Houshold, was probably an agent who worked for the Parkinsons regarding their land purchases and possibly also other business matters.

3. There have been a number of discussions on WWW pages of the means of rapid communication in the Transvaal over many decades being ‘per Kaffir’. That is, it involved using a messenger, African, to send letters and packages when rapid delivery and/or a rapid reply was desirable. In such references, the human agency involved in the shape of the man or young boy concerned (usually not women or young girls) is lost, in two ways. One is by reducing them to a mechanism, the mechanism glossed by the word ‘per’ or ‘by’. The other is by reducing them to a racial categorisation, ‘Kaffir’. It involves at least a double negation of personhood, then, with a third and a fourth means of negation discussed later in this Trace.

The note for you Father is to get the Diagrams of the Land sold in Ledgiton we expect the surveyor up to ?measure so I send this to you thinking you might If not you might have them at Klipt Fontein

If not with you, send the coolie on to Shafton

4. This letter to Eddie Parkinson from JG Houshold provides an interesting example of a Natal variation on the theme of how the human agency involved was lost.

5. the letter-writer, Mr Houshold, is not very familiar or cannot be bothered with punctuation, although his spelling is correct regarding ordinary words, while he spells the town’s name phonetically. The torn piece of paper he has written on conveys that his letter is about ‘doing the business’, rather than being a formal letter or a letter written for ‘keeping in touch’ purposes, and it also conveys something of haste if not urgency.

6. His letter was by implication taken to Eddie Parkinson by someone, certainly male, most likely Indian rather than Chinese: ‘the coolie’. Male because if this had involved a woman then the word would almost certainly have been marked by a gender qualification. Indian rather than Chinese because ‘coolie’ (from a word for slave, kuli) was a word widely used among the racialising terms prevalent in Natal, where significant numbers of Indian migrant workers were present in various economic capacities (David Forbes in the Transvaal refers sometimes to ‘Chinese workers’ or ‘Chinamen’, although there are no Forbes references found to date to Indian people). It reduces the wide variety of their economic activity to one aspect, that of being an indentured labourer whose status and legal rights were almost similar to slavery (as discussed in the Trace on the indentures of Anna, in the Eastern Cape (http://www.whiteswritingwhiteness.ed.ac.uk/traces/indenturesanna/).

7. As well as being reduced to a racialised category, ‘the coolie’ here is a mechanism, as the means by which Houshold can send his letter and expedite his business with Eddie Parkinson. Although no formal ‘address to’ is given, content indicates this was Klipt Fontein. And then, if the Diagrams were not forthcoming from there, the messenger was to be sent on to Shafton by Parkinson, who was to ‘make the coolie understand’ the route to be taken to get there.

8. What extra work does ‘make the coolie understand’ do? It implies unfamiliarity with the places mentioned and specifically with Shafton. It also implies deficiency, a deficiency of understanding and not just of local knowledge. The latter would have involved telling, as in tell them the way. The former requires making them understand, and it suggests difficulty, probably of a linguistic and communicative kind. And by being a generic (for ‘Indian-and-Chinese’) it homogenises in a diminishing way.

9. Such ‘make them understand’ comments have not been encountered in respect of letters and notes that were sent ‘per Kaffir’. Many white settlers and their messengers, certainly in more rural areas, knew enough of a polyglot, a patois, to communicate; and increasingly African people could speak English or the early form of Afrikaans, and some whites like the Forbes were fluent in local African languages. The particular Indian (or Chinese) language spoken by the messenger here would probably not have been part of these communicative borrowings. So the person concerned had to be made to understand.

10. This is a third level of the racialising impact of such terms as ‘the coolie’, that these terms have built into them ideas about incapacity and deficiency from an assumed white norm. ‘The coolie’ cannot understand you, not that you cannot understand him or her. A fourth level involves using diminutives and is discussed elsewhere on these pages, including in a Trace concerned with changing uses of the word ‘boy’ over time (go to http://www.whiteswritingwhiteness.ed.ac.uk/traces/i-send-this-boy-21-9-1896/)