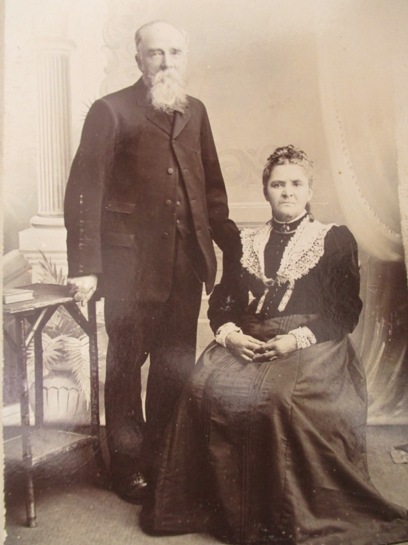 1. Zoom into this photograph, and tiny details can be seen with great clarity. It is one of the ‘those’ photographs, taken with a studio camera with an extraordinary lens and requiring great stillness on the part of the people photographed for a fairly lengthy time. From the clothes and the studio props, it probably dates from the mid 1890s.

2. It is indeed a studio photograph, and no clues as to who these people are or where it was that they were photographed can be seen. Looking at it now on the WWW website, it is both anonymous and eponymous. They could be anyone, they could be everyone, or at least everyone of a certain type of person at that particular time. What type?

3. Looking casually, it shows a standing man with a luxuriant beard. He is white and elderly. The woman he is stood beside has her hands folded on her lap and stares with a rather rigid expression out at those who are looking at her. She looks somewhat younger. The mind jumps to seeing them as a pair, a married couple in the most stereotypical of photographic poses. They look like what Victorian respectability is supposed to look like. This photograph represents what looks like a picture of Victorian patriarchy too. But things are rarely so simple, including Victorian respectability.

4. The photograph is in fact part of a large archive collection containing letters and other documents by and to members of Mr and Mrs Brown’s family, the Browns of Taungs, in the north of what is now South Africa (UCT Schreiner-Hemming-Brown). One of their sons married a woman in the Hemming family, a Schreiner kin connection. It shows Rev John Brown, who was an LMS missionary of some renown. It also shows Eliza Sarah Brown formerly Read, daughter and granddaughter of other LMS missionaries, and a devout rather fundamentalist Christian who had herself experienced a call to mission work.

5. Looking at Rev and Mrs Brown in this photograph, they appear the quintessence of Victorian respectability in a colonial context, she with her dutiful folded hands, he with his resplendent beard and patriarchal stance. But. However. Look again with the following paragraphs in mind.

6. Eliza Brown was a daughter of Rev James Read junior, and granddaughter of Rev James Read senior. Her paternal grandmother was Sara Elizabeth Valentyn, a Khoisan woman, and her white mother Anne Barker was the daughter of another renowned LMS missionary. Anonymized, in one of Olive Schreiner’s essays and some letters, Mrs Brown is represented as lamenting that she ever had children, such was the discrimination and prejudice they experienced because ‘mixed race’.

7. Looking more closely at the photograph with this knowledge in mind, that Mrs Brown is of slightly darker skin tone than her husband can be seen. ‘Race’ as a category and concept is often, perhaps most often, viewed in terms of something that is seen, that is visible, that is associated primarily with skin colour. Only if one knows that Mrs Brown was ‘mixed race’ (which is how they referred to it) is this actually very visible. As represented in the photograph, it is only when this knowledge is put into the mind that it can actually be seen at first sight. ‘Mixed race’ and visibly so is perhaps mainly seen in contexts where there is scrutiny of such things as skin colour in punitively directed detail. Without this knowledge, it is the apparatus of Victorian respectability that is foreground in the mind. With it, for some people looking at it, then race becomes foreground.

8. Susan Sontag’s Regarding the Pain of Others is concerned with looking at photographs of suffering, with her attention on depictions of war, violence, death and so forth and how the person looking is positioned in relation to such suffering. But there is pain of different kinds and different degrees, and clearly from what Olive Schreiner writes, when one looks at Mrs Brown in this photograph then one is regarding the pain of this other person. And looking again at Mrs Brown, is it an air of resignation and a quiet determination that can be read on her face? or is it just that fixity that comes from being immobile, waiting for the camera shutter to do its work?

9. There are of course many books on visual analysis with some extraordinarily famous ones among them, of which Sontag wrote two. But nothing replaces taking a long, detailed look at what is depicted in a photograph, and then looking again, and again. Roland Barthes might be fixed on the punctum, the small something that is experienced as most striking, but it is the studium, the mass of detail that is shown, that bears the interpretation of story.

10. And what of John Brown? He stands looking out like a figurehead, and the temptation is to see him in patriarchal terms and interpret him according to the stereotypical pose he has taken up in the photograph. Be that as it may, there was also more to him than this, including his public interventions on race matters in published newspaper letters. The John Brown/Eliza Read marriage appears to be have been both long and happy, the archived letters resound with quiet pleasures of family life, as well as expressions of loving caring and religious fervency. There was certainly more to him than can be seen in the photograph.

11. In looking at the photograph again with these things in mind, an important question with significant ethical implications arises about how to interpret what is going on. The temptation is to assume that race inheres in Mrs Brown, rather than in both of the people shown. So, focusing on her and looking yet again, does one see race, or does one see Mrs Brown? This might seem like splitting hairs, but it raises something pretty fundamental, which is that Mrs Brown inhabited her own specific life and identity, and justice requires that we remember this and do not expunge it. To put it at its most basic, horrible people treated Mrs Brown terribly. They treated her as reducible to race, as forensically established by skin tone, and they positioned race in negative terms. Do we now really want to reduce her in a way that has similar outcomes although different intentions and more positive values?

12. Mrs Brown, the archive letters and other papers including in the LMS collection tell us, was very much a three-dimensional person with a mind of her own and who lived what was in many ways an extraordinary life. She was not reducible to any one characteristic. But how to retrieve this and move beyond the surface of the photograph? How to see race and at the same time see both of the Browns in complex and nuanced terms as they were in life? The title of the trace is an invitation to consider this crucial question – seeing race and its social structural dimensions, or seeing the Browns in all their complexity and individuality? And, importantly, how to hold them both in tandem?

13. There is no easy answer. There is instead the spade work of long-term detailed archival work, a determination not to treat people in over-generalised eponymous terms and, most importantly, remembering that we may be regarding the pain of others. And their complexity.