Prosecution for Libel: An 1840 News Item

Please reference as: Liz Stanley (2017) ‘Prosecution for Libel: An 1840 News Item’. http://www.whiteswritingwhiteness.ed.ac.uk/Traces/Prosecution-for-Libel and provide the paragraph number as appropriate when quoting.

1.  On 13 May 1840, the South African Commercial Advertiser reprinted the news item below from the Grahamstown Colonial Times.

PROSECUTION FOR LIBEL BY A CAFFER CHIEF

We give below from the Colonial Times, Grahams Town, a report of the first instance in which a Caffer has applied to a Colonial Court for injury done to his character. Without anticipating the result of the application, we must express our opinion in favour of such a mode of proceeding. We feel surprise that many of the Chiefs have not been advised long ago to seek redress in this civilised manner, instead of allowing resentment to rankle in their hearts till it led to open violence. 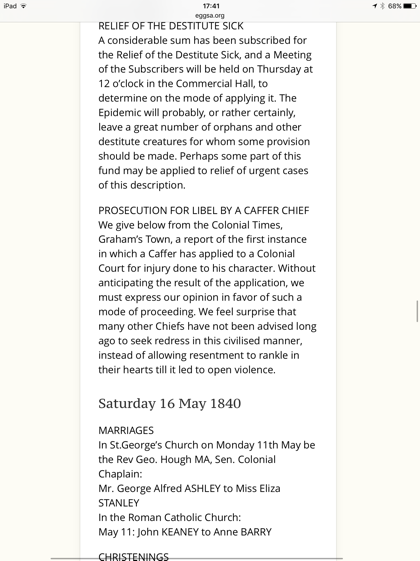 2.  This news item had earlier appeared in Grahamstown, by implication in a newspaper which had limited circulation. However, its content, concerning a libel case, was deemed important and interesting enough, as it was the first time such a thing had happened, to be reprinted for the larger readership of the Commercial Advertiser, distributed Cape-wide.  It expresses clear the approval of the libel prosecution, which had been taken up by an unnamed Xhosa chief (but perhaps Sarili, successor to Hintsa) because of ‘injury to his character’ – it states, ‘we must express our opinion in favour’. Indeed, it goes further, in also stating that ‘seeking redress in this civilised manner’ should have been advised before, with the implication that just cause for it and the resulting rankles existed.

3.  It tut-tuts that such irritations can become violence, thereby ignoring or disavowing that provocation for these might include violence and injury to persons and not just their character. Its comment is also tempered by the use of ‘civilised’, clearly implying other responses were not civilised; and attached to the term ‘Caffer’ this has a racialising effect, although in 1840 this word did not have quite its present offensive overtones. But nonetheless the overall effect is a positive comment with a tacit acceptance that ‘injury’ did occur.

4. This was 1840. The news item was written in the wake of the sixth Frontier War, which had ended in 1836, an ending preceeded by the murder of the then Xhosa leader Hintsa and mutilation of his body by Eastern Cape whites including William and George Southey. The British government was appalled by the behaviour of its South African troops, as well as that of the colonists. 1840 was also the year that slavery finally ended in South Africa, with reparations being paid that year to erstwhile ‘owners’, and the newer post-1836 legal framework was also fully instituted. This is involved a period of indentured labour that then became ordinary employment that people were free to leave. 1840 was in addition the year that the Buxton Report’s recommendation, that the so-called ‘Ceded Territory’ in the Eastern Cape should be returned to empty neutral status, had effect. These were interesting times and with many mixed activities and behaviors regarding how matters of ‘race’ were shaping up. It was the worst of times, it was as well the best of times for there was hope that the racial order-in-the-making would be unmade and something more just and more egalitarian come about.

5  A bloody frontier war took place, awful events occurred, and maliciously lying things were said. This news item advocates going to law instead, and implies that the Xhosa chief was in the right; and its writer gives the impression of meaning this suggestion that disputes, even major ones, could be dealt with, not by violence, but by legal disposition. It was no accident that the Advertiser had been under the editorship of the outspokenly liberal John Fairbairn for some years. Its recommendation is interesting on a number of levels.

6.  One is that, beneath and around the fighting, other ordinary things happened between black and white, on a par with libel cases being taken to law. One instance is that folk in Grahamstown invited a bunch of Xhosa chiefs and their families to tea followed by a dance, reported on elsewhere. This gives a very different impression of warfare at that time than humanity has now become accustomed to, of a more absolute and totalising kind. Ambushes, cattle raids killings, libel cases, afternoon tea.

7.  The other is that this is a very ‘Elias and civilizing processes’ route to propose, , that conflict should become and incorporated into routinisation and state monopoly in going to the law. Except of course that it was ‘the state’ that was a major part of the problem for African peoples generally and Xhosa leaders such as Hintsa and Sarili in particular, so this was to routinise on white colonial terms.