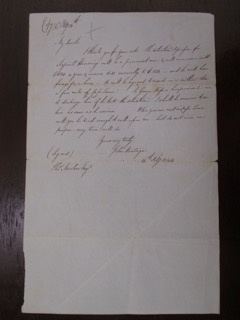 1. John Montagu took up the post of Colonial Secretary of the Cape in April 1843. He became a close political associate of Robert Godlonton and often provided Godlonton with information in advance of it becoming public – and in some instances when it never did become public. There were other people too who provided Godlonton with political and other intelligence, including his business partner and nephew Robert White, with one of White’s letters to Godlonton the topic of another trace (www.whiteswritingwhiteness.ed.ac.uk/traces/two-messengers-waylaid-and-killed). The letter that is the Trace for discussion here, however, is not of this privy and political kind. It is a copy of an unremarkable business letter from Montagu concerned with routine and rather dull matters. The transcribed text appears below.

2. One of the policies Montagu instituted after his arrival in post was to regularly collect taxes, setting up a system and employing officials who travelled the area making tax collections. This Trace is a copy made of a letter that Montagu wrote to another official, Thomas Maclean, concerning such an appointment, one of the first to be made. The name of a suitable person had been suggested; the pay level had been agreed; and also any extras this would include (horse fodder was), as well as a stipulation concerning residence. This is very much at the level of the ordinary business of white officialdom and what it provides is a glimpse of the turning of a small cogwheel in the growing bureaucracy of the colonial-settler state. So, back to the archive collections to investigate this (nothing in the family collection, so thence to the Colony collections).

3. The man that Montagu had in mind was John Hemming, an Irishman by background who had served with some distinction in the army as a Sergeant, including in South Africa. A married man, Hemming‘s children stayed in South Africa and were joined by some other family members. Later, in 1863, one of his sons, Robert Hemming, married Alice Schreiner. She was the second daughter and fourth child of the missionary Schreiner family, with its fourth daughter and sixth child being the feminist writer and social theorist Olive Schreiner, who was also a major letter-writing. Robert Hemming was a trader, postmaster, farmer, and ran a timber mill business, doing some of this and some of that. Later he became the founding Librarian of the then recently formed Johannesburg Public Library, one of the major public institutions in the Cape. So, back to archive collections to investigate this (not much in the family collection, so to thence to the Library collections).

4. John Hemming took up the post. He was an assiduous worker at whatever he did and became a prominent figure in Cape Town public life. Family records also show Robert Hemming to have become somewhat reclusive, or at least distant from his children and their families, and generally to have never really recovered from the early death of his wife Alice Schreiner. So, back to the archive collection to investigate both (but few clues beyond the fact).

5. When the letter was written, did John Hemming already know that this position would be offered to him? It is possible, not likely, that he was already employed by the new Governor, George Napier, as it was Napier who would ‘discharge him’. But how the letter is phrased – ’Sergeant Hemming’ and Montagu’s use of the word ‘arrives’ – is intriguing and it is more likely Hemming was still in the army, and as Governor of the Cape, Napier would have had the official power to release him from his army contract. So, back to the archive collection to investigate this (no clue beyond the fact).

6. There is an obvious question about this Trace, concerning whether a copy is or is not a letter. No, yes. Or: Yes, no.

7. A less obvious question is, did Maclean give this copy of the letter to Hemming, which is archived in the Schreiner-Hemming Family collection? Or if not, how did it find its way there? So, back to the archive collection to investigate this (though there is no clue). And why did Montagu ask Maclean to call on him (again, no clue)?

8. Standing behind this document, there is the question of what the role of the Colonial Secretary was. This was one of the issues in white colonial public life of the day, not only in the Cape. There was no rule-book, the formal convention was that the Governor governed, the Colonial Secretary provided a secretariat, a bureaucracy. In life, it was far less simple.

9. Clearly Montagu did considerably more than just act as the Governor wanted him to. He is for example seen as the key figure in sorting out the finances of the Cape, funding the Xhosa or Frontier Wars, instituting a programme of road and mountain-pass building using convict (and largely black) labour and effecting other consequential policies. And that he has a network of people like Godlonton to whom he fed information and through which he was consequently kept informed in a reciprocal way was part of this. As indeed was appointing reliable and well-qualified men like John Hemming to new and important civil service posts.

10. And what of whiteness? Can this copy of a small and insignificant letter concerning a possible appointment tell anything of interest or consequence about the processes that gave rise to South Africa’s racial order?

11. Whiteness is clearly apparent in the growing colonial-settler state, that complicated amalgam of the colonial presence and its military-bureaucratic apparatus (Napier, for instance, was both Commander-in-Chief of the Army and also Governor of the Cape Colony), and the rapidly growing settler institutions and apparatus of governance particularly at province and local levels. The state is a process composed of procedures enacted by persons, and not an edifice or structure in the usual sense of this word. This Trace, this copy of an inconsequential letter, is one of the dull routine signs of a state process unfolding and a set of procedures being established and enacted.

12. Policies result in practices, procedures produced routines, there are rules and requirements, officials proliferate at all levels. War marches hand-in-hand with taxation, roads and mountain-passes, and the requirement to fill-in forms and provide copies of documents that can be filed. Official files.

13. But alas a story cannot be told about how this copy of a letter about Hemming’s appointment ‘escaped’ its ordained fate and ended up where it did, in the Schreiner-Hemming family papers.

Copy Rcd
My dear Sir
The situation I propose for Sergeant Hemming will be a permanent one & will commence with £120 a year & increase £10 annually to £150 & he will have forage for a horse. He will be required to reside in or within three or four miles of Cape Town.
Sir George Napier has promised me to discharge him if he took the situation. I shall be anxious to see him as soon as he arrives.
When you are next in Cape Town Will you be kind enough to call upon me, but do not come on purpose, any time will do.