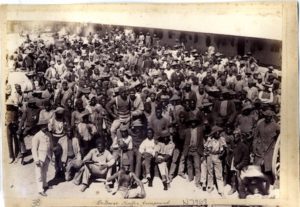 1. A ‘compound’ is, or rather became, a kind of total institution, as a structure within which a group of usually mining workers were able to live and move from its living spaces to their working places without having to leave it until their (fixed term) contracts of employment ended. Within the compound would be found sleeping accommodation, the provision of basic rations, cooking facilities, stores via which rations could be supplemented for those with any money (as pay was usually made at the end of the contract) or via credit (aka tick), and access to their workplaces. If they left the compound for social, consumption, sexual or other purposes, there were rigorous and indeed usually very intrusive procedures for ensuring they could not smuggle diamonds, gold or other precious minerals out.

2. The compound is a quintessential feature of the material organisation of labour in South Africa and has been since the mid-nineteenth century and discoveries of diamonds followed by gold. It still exists in a modified and less draconian form in the hostel system, wherein migrant workers from many different parts of South Africa and also countries beyond are housed during the period of their employment contract, typically in mining but in some other sectors as well.

3. Shown above is a photograph of the compound at the De Beers diamond mining location in Kimberley which dates from 1886 to 1888. 1886 because that was when the originally open De Beers Mining Company compounds changed and became a huge closed one with entrance and exit strictly managed; and 1888 because this was when the mining company changed its name, and this photograph is accredited to its earlier organisational incarnation. There were a few closed compounds provided by other companies a year or so before the De Beers one opened, but when it did it took their organisation to a new level, so its origination acts as a major turning point in racialising labour relations.

4. Compounds were originally just living spaces adjacent to the mining area where African men were employed and to which white men as ‘diggers’ had staked their claim, the irony in this terminology being that digging was mainly done by those who were black. As diamond mining moved from this initial phase and became a matter of combination, technicalisation and capitalisation, so finding and working diamond pipes and retrieving diamonds became a matter of large-scale organisation, capital and control.

5. To an extent the introduction of compounds and associated working practices at the face, such as strip searches when men came off shift, were mechanisms to prevent IDB or illicit diamond buying [stealing and selling], which for reasons of prejudice were associated more with African than white workers. To an extent, they were a means to constrain men to work out the full term of their contract, rather than leave when they had accumulated sufficient pay for their particular purposes. And to an extent they were a means of ensuring that workers had sufficient food and medical attention to continue as efficient workers, so that the horrendous level of industrial injury and also the effects of poor diet such as scurvy that had characterised the earlier phase improved rapidly. Another irony. 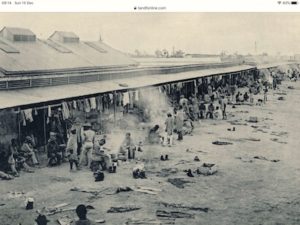 6. The Kimberley compound associated with De Beers was designed and set up by an associate of Cecil Rhodes (key director of the De Beers Company) who was called ‘Matabele’ Thompson. It was huge, with accommodation provided for around 3000 men in an area of some 25 acres. The model was the military barracks. There was a 12 feet high wall of brick and corrugated iron around it. There was a net over the entire compound to stop diamonds being thrown out. It had several stores within it – a baker, butcher, grocers, and a church. There was a dispensary, a hospital and bathing facilities. Reductions of pay were made for medical services and basic rations, no alcohol was permitted, family were not allowed to visit, and women were not permitted to enter the compound. The accommodation areas were sets of 25 by 30 foot rooms, each housing 25 workers, with wooden bunks.

7. Thompson’s plan was that workers would be contained in the compound for three months, later for six months when contracts were extended. The workers only had access to the mine through a covered entrance/exit and then down an inclined shaft. There was also a rigorous procedure when contracts expired, with discharged workers washed and searched and confined for five days (so bowel movements would remove any swallowed diamonds) before being released. On the first day the De Beers compound was in operation in 1886, there was strenuous opposition and all the workers went on strike. After about a week the strike ended.

8. What does the compound system tell about whiteness in the South African context? Much attention is given to segregation policies and practices occurring post-1910 and the Union of South Africa. Of course these are obviously crucial; but it is also important to recognise that there were antecedents upon which such things were built, thinking and practices which informed structures of perception and possibility and policy. The compounds are one of the essences of segregation, with those who lived and worked in them treated entirely as engines of labour and separated off from any and all who were not part of the labour process. The use of compounds is relatedly an element in dehumanising, by treating men as just hands and labour, and confining and corralling labour to ensure maximum effect as an engine of production.

9. The photograph below, also of the De Beers compound, shows an important aspect of this very clearly. The compound has at one corner a Benthamite ‘Panopticon’ type of watchtower. This gave a view over the whole enterprise. The compound as a social form thereby became a closed organisational structure having the means of constant whole body, 24 hour and 360° surveillance. A total institution, in sociological terms. 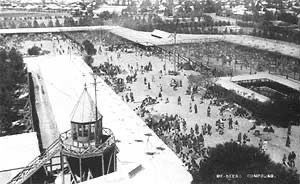 10. The capacity for surveillance of the person joins together the compound, the pass and the location, as administrative structures which translated into policing procedures and which conveyed the impression of efficiency and competence and total control. But these were rarely achieved. The compound, for instance, brought together disparate groups around common purpose and, while aiming for compliance, also helped engender community organisation and resistance practices.