Please reference as: Liz Stanley (2017) ‘Communicate to the King, 25 January 1884′ http://www.whiteswritingwhiteness.ed.ac.uk/Traces/Communicate-to-the-King-25-January-1884/ and provide the paragraph number as appropriate when quoting. 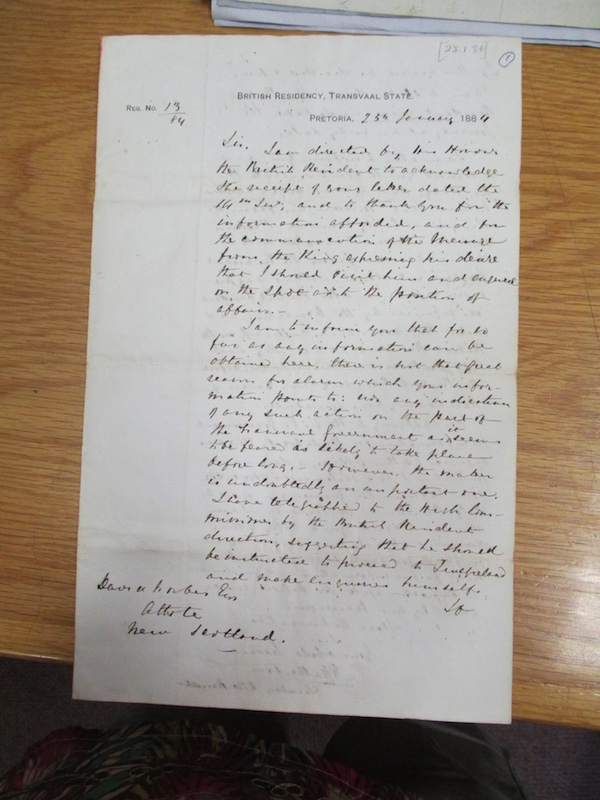 1.1 On 25 January 1884, the Secretary to the British Resident (a diplomatic position) to the Transvaal government in Pretoria replied to a letter that had been sent to the Resident by David Forbes. The Secretary’s reply is reproduced below, with the ‘alarm’ referred to in it being that the Transvaal government might either annex or make a ‘protectorate’ of Swaziland.

1.2 In 1881, the Pretoria Convention had agreed to the boundaries between Swaziland and the Transvaal. A few months after this letter was written, the 1884 London Convention amongst other things guaranteed the independence of Swaziland while adjusting some of its borders in favour of the Transvaal. The 1884 Convention in turn was then  overridden by a kind of de facto annexation of Swaziland by the Transvaal through an 1894 Convention – which the Swazi government completely rejected and the earlier possibility of which was the matter raised in David Forbes’ original letter.

1.3 Swaziland was one of a number of hotspots where the European 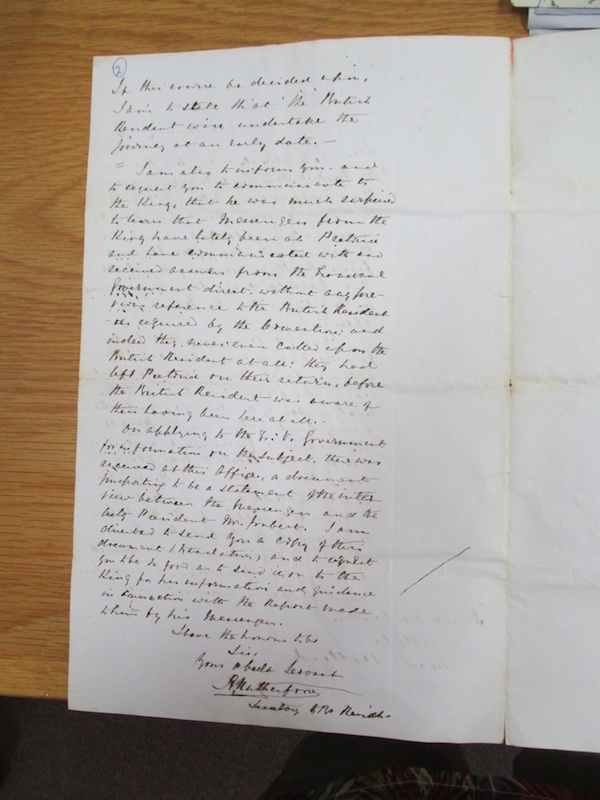 powers and local powers contended in Southern Africa in the 1880s and 90s. In this case it involved the troubled relationship between Britain and the Boer Republic of the Transvaal, which latter was at various times independent and then annexed by Britain, as well as the interest of both of these in the independent African kingdom of Swaziland. Discoveries and the mining of diamonds in the Kimberley area had been followed by gold in the Barberton and Lydenburg areas followed by, the year before this letter was written, gold on the Witwatersrand and gold and other minerals in Swaziland itself.

2. Directed by his Honour

2.1 The transcription of the Secretary’s letter here is followed by a discussion of some of its interesting aspects.

I am directed by his Honour the British Resident to acknowledge the receipt of your letter dated the 14th inst, and to thank you for the information forwarded, and for the communication of the Messenge from the King expressing his desire that I should visit him and ?enquire on the spot as to the position of affairs.

I am to inform you that for so far as any information can be obtained here, there is not that great reason for alarm which your information points to: nor any indication of any such action on the part of the Transvaal Government as ^it^ seems to be ?feared as likely to take place before long.- However, the matter is undoubtedly an important one. I have telegraphed to the High Commissioner by the British Residents direction, suggesting that he should be instructed to proceed to Swazieland and make enquiries himself. If

If this course be decided upon, I am to state that the British Resident will undertake the ?journey at an early date. –

On applying to the Travl Government for information on the subject, there was received at this Office, a document purporting to be a statement of the interview between the Messengers and the Actg President Mr Joubert. I am directed to send you a copy of this document (translation) and to request you to be so good as to send it on to the King for his information and guidance in connection with the Report made to him by his Messengers.

I have the honour to be

Secretary to the Resident

3.1 Rutherford’s letter is addressed to David Forbes, but whether this was the father or the son is not clear. It could equally well have been either of them, as both were persona grata with the Swazi ruling elite and particularly the Swazi royals. Both were fluent in siSwati, with Dave Forbes jnr being bilingual; David snr had high-level contacts among British colonial politicians and administrators; and Dave jnr was favoured by the Swazi Queen Regent. What is very clear, however, is that the David Forbes in question was both willing and able to intervene at a high level regarding Swazi matters and was used a go-between by both British and Swazi interests.

3.2 Rutherford’s letter hedges its bets, commenting that what Forbes ‘feared’ was not likely, but also that it was important enough to contact the High Commissioner to ‘suggest’ that he should direct the British Resident to go to Swaziland to deal directly with the Swazi King. The letter also makes it clear that neither the Resident nor his Secretary had had any idea that Swazi Messengers were in Pretoria negotiating with the Transvaal government. In addition, the Messengers had clearly deliberately avoided making any contact with the Resident. And although not stated, the use of the capital letter for Messengers indicates that these are likely to have been senior indunas with power to negotiate on behalf of the King.

3.4 As well as the British Resident having been caught on the hop, what also comes across is that the King was an active agent in these matters and was playing off Britain and the Transvaal against each other. Moreover, the Swazi King acted in concert with the Queen Regent and also the senior indunas, a kind of oligarchical system of governance rather than a straightforwardly monarchical one. Consequently the sending of the Messengers implies a considerable unanimity of purpose on the part of the ruling elite.

3.5 There is a lot going on here about whiteness, with the broad context being the scramble for this particular part of Africa on the part of Britain and the Transvaal. The propelling force for white interest was two-fold. One was the discoveries (later realised to be mainly spurious) of gold and other minerals in Swaziland and the rush to gain mining concessions from the King. The other was the role of the Swazis in providing migrant labour for the ‘Diamond Fields’ and then the labour markets that had arisen subsequently around other minerals discoveries. The King had originally sent age-regiments of older boys to work in mining, with the local interest in this being very instrumental and resistant a more permanent engagement in wage labour than short-term contracts to purchase particular items.

3.6 Covetous eyes were being cast on Swaziland, then, because of the possible source of wealth beneath soil, and on Swazi people, men particularly, because they could be compelled to give up more time to wage labour by a determined white-controlled state.

3.7 The imperial presence of Britain and the colonial presence of the Transvaal existed as contending white interests on the borders of Swaziland – on the borders in a literal as well as a figurative sense. Swaziland was a self-governing independent entity and determined to stay such. The imperial and settler colonial interests were on the edges and admitted on suffrance (as with the granting of land and minerals concessions), but their sources of military power and as well as greedy intentions put the Swazi rulers and government in a response mode (again, the pell-mell granting of concessions is a key example).

3.8 Sending the Messengers to negotiate with the Transvaal government, and the later sending of senior Swazi indunas to Britain in 1894 to do so with Queen Victoria and her officials there, must be seen as attempts to regain agentic force and power. Perhaps in a response mode, perhaps not entirely successful, but these were nonetheless bold attempts to do what could be done in the circumstances. And it should not be forgotten that in the longer-run Swaziland remained independent.