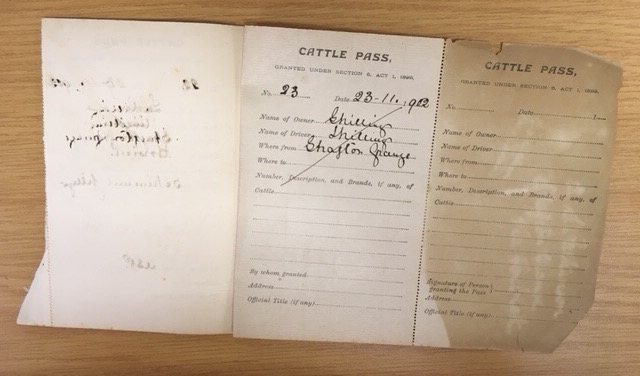 1. Arthur Parkinson (1858 – 1908) was the younger son and fourth child of Edwin and Mary Parkinson. In the 1890s he became a stock inspector for the Lion’s River area (slightly to the north of Howick, itself to the north of Pietermaritzburg), a role that became permanent in the period after the South African War of 1899 to 1902. His job was to tour round the district inspecting sheep, goats, bulls and heifer groups for notifiable diseases, instituting proceedings to fine people who failed to report outbreaks of such diseases, or who moved stock without passes which certified that doing so was permissible, and sometimes himself arranging for the large-scale movement of animals. The Trace for discussion here is one of the cattle passes issued by Arthur Parkinson, with this particular example dated 23 November 1902.

2. A reader at this point may be asking themselves the question, what does this have to do with whiteness? Yes, the racial implications of the human pass system for people of particular skin colour are quite clear. No, the connection with the movement of stock is not. But in addressing the question of what this might have to do with whiteness, the response is nonetheless – quite a lot.

3. Settler colonial government was well instituted in Natal by 1902, with representative institutions such as the legislative and executive Council instituted in the 1850s and full responsible government  gained in 1893. However, settler governance took a somewhat different form there as compared with the erstwhile Boer Republics of the Free State and Transvaal and also the other British colony, the Cape,  themselves different from each other. It is helpful briefly to consider a few broad aspects of its settler governance and that of the kingdoms of Swaziland (Forbes territory) and Zululand (under attack but at this point still partially intact under Dinizulu).

4. While of course recognising important differences, the two African kingdoms as much as the Natal government were characterised by well-established formal rules and regulations. In addition, they all had wide remit in terms of the exercise and reach of power, with infringements incurring a system of fines and other punishments, administered by an organisational apparatus of control and legitimate force. And in both the settler and the kingly African systems, such controls and punishment for infringement reached down into the quotidian aspects of life, including with regard to farming and stock-keeping, actually crucial in African contexts, and very important in white settler ones.

5. The differences included a more intrusive and regulatory style of settler governance. This was backed by notions of authority provided by the settler state’s use of ‘advanced’ knowledge through its employment of licensed experts associated with science as a superior form of knowledge. It was this that supported the early identification of notifiable disease, the enforced preventative destruction of animals that had signs of some diseases, and the licensed movement of animals deemed to be healthy, through a pass system administered by lower-level experts with hands-on practical skills, such as Arthur Parkinson.

6. There is also another pertinent difference, with regard to the relationship of such decision-making with record-keeping. Clearly both African and settler systems maintained records, with one based in memory in its kingly (sometimes capricious) and also collective variants, and the other in paper recordings with their usually greater degree of standardisation and routinisation. Standard written records can also be easily duplicated, enabling transferability with variance minimised.

7. The cattle passes show something of how this might pan out in practice. They also indicate that it might not always be quite so straightforward.

8. As the photograph of the 23 November 1902 pass issued to Sterling and provided above shows, the cattle passes take the form of a printed document in two joined parts, with a reference to formal rules and legislation at the top of each part implying a high level of government legislative involvement. Each part of the pass has a series of headings printed on it, which show that almost exactly the same information was to be recorded on both. The sole difference is that ‘by whom’ appears on the retained left-hand part, while ‘signature’ appears in the same place on the part of the form that was issued, indicating the legitimacy and proof conveyed by an authorised signature. The two parts are divided by a serration, with the right-hand side being torn off and given to the person driving (in the sense of being a drover) the cattle or other stock, with the owner also recorded. The form in addition indicates that distinguishing colours and marks of the stock in question should be recorded.

9. The stock inspector, if this example and the rest of the retained forms in this booklet are anything to go by, in practice recorded on the part they kept just the things they deemed more important, with this being what was actually non-repetitive information. This was made possible because the right-side form is not a duplicate (which would have been made using a manifold writing device from the 1840s on, and later with carbon paper). It is rather a parallel form, necessitating two separate completions of largely but not entirely the same information. And thus the shortcut of the stock inspector omitting repetitive information on the retained left-hand part.

10. The bureaucratic rules of government with regard to routine complete standardisation in record-keeping might, then, be bent or broken in practice in the field of activity concerned, to suit circumstances and working conditions. Regarding this particular example of cattle passes, what varied was recorded, things that were standard were left visibly blank but were actually ‘filled’ by practical working knowledge.

11. If such things had occurred with visible and on the surface signs of non-compliance left by lower-level rule-enforcers within the Zulu or Swazi system of governance, serious repercussions would have followed with punishments meted out. Regarding settler governance, the theory and the practice were often rather (or even very) different. The practices involved might be more stringent, but also more lax, than ‘the rules’ because the ‘man on the spot’ was expected to exercise independent judgement. The formal rules as a consequence did not always provide accurate predictive measures for which of the range of possible responses – the more stringent or the more lax or something in between – would occur, or regarding to whom and what these variations would be applied, because the lower-level enforcers might change how they conducted themselves and their dealings with other people.

12. Cattle passes were introduced by an increasingly organised and professionalised system of settler governance as part of exerting state power over one of the most important aspects of life for both settler farmers and also indigenous African ones, the movement of stock of all kinds. The intentions were dual, to control if not eradicate the outbreak of major animal disease epidemics, and to enforce compliance on the part of both white and black populations. The ownership of cattle had to be recorded on the cattle pass forms, as well as the name of whoever was ‘driving’ or moving them. Regarding the example shown, this was the same person, an implicitly African or coloured man called simply Sterling (with no title or name), perhaps a tenant farmer at Sephton, while some of the retained forms have nothing recorded as owner. This can be ‘read’ as implying Parkinson ownership and this was not Arthur Parkinson himself, but his father and the other major farmer in the family, his sister Amy.

13. On occasion Arthur Parkinson certainly required the destruction of Sephton cattle and his work diaries indicate he was even-handed in applying rules, even if rules of thumb, to both black and white as well as family and not family. But to modern day sensibilities, that he oversaw his own family stock as well as that of others raises potential conflicts of interest and would be thought unacceptable by many.

14. So what do cattle passes have to do with whiteness, what is the nub of the matter here? Passes of all kinds are concerned with regulation ‘full stop’. Such systems extend the powers of the regulatory authority instituting this and are part of the apparatus of control. Cattle passes are in economic terms just as fundamental to the workings of a settler economy when this is founded upon pastoralism and tenant farming as a pass system regulating human movements. They are sides of a coin, the coinage of the settler state.