A letter and three lists: Hawksley to Rhodes, 9 February 1901

Please reference as: Liz Stanley (2017) ‘A letter and three lists’ http://www.whiteswritingwhiteness.ed.ac.uk/Traces/A-letter-and-three-lists/ and provide the paragraph number as appropriate when quoting.

1. On 9 February 1901, Rhodes’s solicitor Bourchier F. Hawksley wrote to him about a matter exercising both him and Rhodes’s banker Lewis Michell, and also Rhodes himself (Bourchier Hawksley to CJR, 9 February 1901; Rhodes Papers 27/130,5; 4352-4360). This was, how much was Rhodes worth, in money, stocks and shares and other investments and all the rest? Neither they nor Rhodes knew the answer, for interesting reasons. Sometimes, for instance, Rhodes’s investment accounts with financier and investor Julius Wernher were in credit and at others in deficit; and while he spent personal money lavishly, the boundaries with his official role in De Beers or in Gold Fields Consolidated among others were as unclear financially as in other ways; also any of Rhodes’s many schemes might be drawn on to further whatever particular new venture he was pursuing at a particular point in time, such as financing the Trans-Continental Telegraph (see The Rhodes Papers, Summary Thoughts), if other means of financing these were not available or securing them would have held him up. 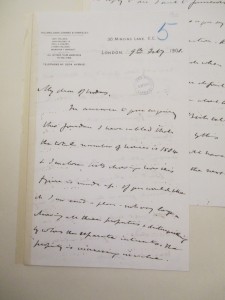 2. These were just the tip of what was a complicated and indeed convoluted financial iceberg, involving other companies, investments, share-holdings, property and more. The result was the considerable difficulty that Hawksley and Michell had in pinning down such a mundane matter as a bottom line: how much? Thus an earlier enquiry by Rhodes to Hawksley and then Hawskley’s 9 February 1901 response in the letter in question.

3. What was involved here was not insignificant. One conjectural figure from the many, and at a very small-scale compared with other aspects of Rhodes’s finances – Rhodes’s monthly spend on running his house Groote Schuur, covering all staffing (but not other costs) for the house, stables, garden and wider Estate, was helpfully estimated in detail at the start of 1901 at £417.16.8 (Groote Schuur monthly estimate, March 1901, Rhodes Papers, 28/218; 1072). At today’s values, this is a minimum of around £40,530 per month. The stakes were high, then, as even if just one piece of the financial jigsaw-puzzle was overlooked, this could concern potentially very large amounts of submerged money indeed. And this is so with the matter that Hawksley’s letter deals with.

4. Hawksley’s letter was written specifically to accompany three lists, which are the nub of the epistolary intent here. His letter has other content, although this is incidental to its opening comment, which is “In answer to your enquiry… the total number of houses is 1584’. These are the numbers of houses owned by Rhodes’s father the Rev Francis Rhodes at his death (487), by his mother Louisa at her death (155), and by Rhodes himself (942), all in London, mainly in Dalston although some in Hampstead. The total of 1584 is carefully but slightly oddly provided by Hawksley.

5. It is slightly odd because the first two lists were of houses where the income from ground-rents and rack-rents was held in trust to benefit all the Rhodes siblings during their life-times, with just those in the latter group being owned by Rhodes personally, as products of his earlier investment. That Hawksley gives the total here as well as the three sets of details implies either some confusion on his part as to who owned what, and/or an awareness that the various Rhodes siblings shared investments across their individual finances and in this were led by Cecil Rhodes (perhaps in combination with his brother Ernest; see Ernest Rhodes to CJR, 8 December 1885, Rhodes Papers 28/20). However, what Hawksley’s letter makes apparent is, firstly, that Cecil Rhodes did not know this detailed information about the houses before Hawksley pieced it together using information from Rhodes’s secretary Philip Jourdan and sent it to him, although generally aware that he owned houses; and secondly, that Rhodes wanted the detail so he could see for himself, rather than receiving just a report from Hawksley.

6. A list is a formalised kind of document that provides a series of items (usually linked in some way) in an order. It is striking in respect of this particular example how much work these lists together with Hawksley’s opening paragraph do. The lists were tailored by Hawksley for the specific consumption of Rhodes, and he also offers the possibility of providing them to Rhodes as a plan ‘showing all these properties and distinguishing by whose the separate interests’. The result, lists included, has clear communicative purposes and considerable epistolary intent, albeit with the most letter-like aspects of this being absent from the lists. It is also remarkable that 1580 or so London houses might be overlooked in the sense of Rhodes needing to be provided with information about how many and where they were, for this indicates a scale of wealth and its material forms that is difficult to grasp.

7. Even conservatively priced today at an average of £500,000 per house, these lists concern hundreds of millions of pounds in terms of market value, although obviously the annual income from them would be less but still significant. And this is but one component, and by no means the most important, of Rhodes’s finances, both personal and familial.

8. This brings into relief something observable across the Rhodes Papers when standing back from all the activity going on that is recorded. This is that Rhodes was driven by the excitement and interest of new ventures and a preoccupying immersion in what he called his ‘hobbies’, but that generally (and with his long-term engagement with ‘the north’ and the related conquest of Matabeleland and Mashonaland a notable exception) once these reached a point of development, they were left, not to run themselves, but to be run under the aegis of trusted assistants and managers who were given varying degrees of independence of action. Such ventures were then largely overlooked, in the same way these 1584 houses were overlooked, in the sense of not receiving attention from Rhodes until something went wrong or something new happened with respect to them, and then they gained his focused attention.

9. As noted earlier, there is a hint in Hawksley’s letter and its accompaniments that the Rhodes siblings shared financial interests through the Estates of their mother and father. There were ten siblings who reached adulthood (Elizabeth [Lizzie], Herbert, Edith, Louisa, from Rev Francis Rhodes’ first marriage, and Frank, Ernest, Cecil John, Elmhirst, Arthur, Bernard, from his second), and they each received an income generated from property held in trust, with the houses that Hawksley enumerated being the core of this. However, it is likely that they shared more in financial terms than just being beneficiaries of their parents’ Wills.

10. Early family letters between the Rhodes siblings (those of their letters in the Rhodes Papers specifically) demonstrate a high degree of shared interest in business and money-making ventures. Sandwiched between a personal address at the start and a brotherly or sisterly sign-off at the end of a good many such letters, for example, is focused detail regarding mortgages, investments and share-holdings (see for instance Ernest Rhodes to Lizzie Rhodes, 29 August 1885, Rhodes Papers 28/10; 0945-0947). However, later letters between the siblings are effectively non-existent with the exception of small handfuls from Ernest to Cecil, which are also business-oriented. These imply that some or all of the Rhodes siblings traded their income for significant packages of shares in various of Rhodes’s enterprises. But apart from this hint, it is not possible to tell to what degree the siblings later shared business involvements, although the letters from Ernest Rhodes do indicate a loose kind of family economy, with them all benefiting from the insider knowledge and wealth-making capacity of Cecil Rhodes.

11. Thinking in terms of a successful shared family interest in property and money-making dishes the idea that Cecil Rhodes came from a modest and unprivileged background. It also makes more sense of his later entrepreneurial career, for entrepreneurship was to a lesser degree a characteristic of the unfolding biographies of various of his brothers (especially Ernest) and also at least one sister (yeahEdith).

12. Pronouncements about Rhodes are often, indeed usually, made ad hominem and by reference to deeds and their meanings and the personal characteristics which are read off from these. In research terms, words are another way to go, by exploring in detail the ‘how’ and ‘why’ and also the ‘what’ of letters sent to him, and exploring the same dimensions of the four hundred or so of Rhodes’s own letters that are extant. Also, exploring his finances is yet another way to go and one that throws a different light again on Rhodes as an entrepreneur with a multiplicity of different financial and political interests. Hawksley’s letter and accompanying lists provide a window onto this, giving a very small glimpse of the complexities involved and suggesting some interesting directions in which further research might move. In addition, these items also raise interesting points about ‘the letter’ in two particular respects.

13. The first and most obvious is that any simple distinction between ‘words’ on the one hand and ‘things’ on the other is untenable. Hawksley’s words are supremely material and thing-like in their focus and implication, but words they are although immensely performative in their purpose. While letter-writing forms a co-constructed heterotopia, nonetheless letters also remain closely related to the materiality of the world, people and events they engage with and which give rise to them being written.

14. The second is that, while ‘the letter’ certainly has stable genre-properties belonging to a particular historical époque and cultural context, its practical expositions are many and varied, and consequently analytical attention needs to be focused on epistolary intent rather than being determined by the conventions as such. Hawksley’s lists as much as his letter bear out this truism of epistolary theorising. The lists here are the thing, the message, the point, the purpose, and they are intended to propel activity and performance on the part of Rhodes and others too, while Hawksley’s actual letter is an accompaniment to them rather than having ontological and epistolary force in its own right. But, at the same time, without his letter the lists would lose much of their own force.