Please reference as: Liz Stanley (2021) ‘1837, drawing a colour line’
www.whiteswritingwhiteness.ed.ac.uk/Traces/1837-Drawing/ and provide the paragraph number as appropriate when quoting. 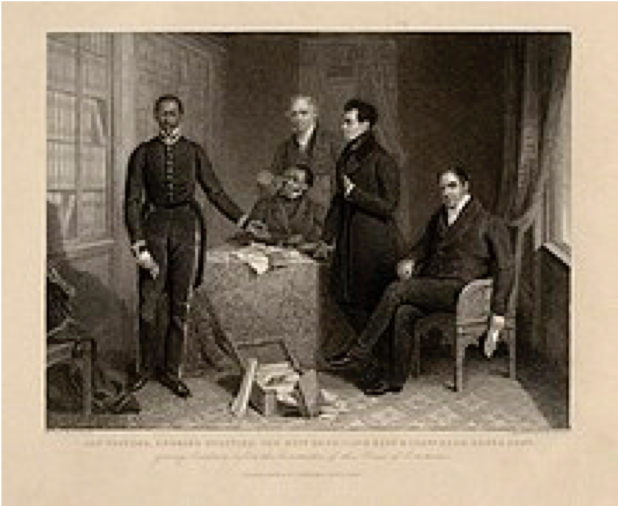 1. What does this engraving represent? The short answer is, a painting was made to commemorate the occasion it depicts, when a British Parliamentary Committee concerned with the rights of people in its colonies was hearing evidence and making its recommendations in an 1837 report. People were called to give evidence, including the men shown. An engraving was later made of the painting and copies of this were sold by Fisher and Co, for these men had stayed in Britain for a lengthy period and became celebrities on the public lecture circuit.

2. The painting now hangs above the doorway in the main building in the Kuruman Mission Station, which has become a national monument in South Africa and is located just outside the town, now more famous for the ‘Eye of Kuruman’, an ever-replenishing water-pool.

3. The engraving had a different and much more public life than the painting, for many hundreds of copies were sold. The men were being called to give evidence to the Parliamentary Committee, chaired by Thomas Fowell Buxton M.P., that was considering how Britain treated territories that had become its colonies. And specifically, in this particular case it considered whether what was known at the time as the ‘ceded territory‘, now part of the Eastern Cape in South Africa, should be under British colonial jurisdiction, or was to be returned to the black groups who inhabited the area before it was ceded (that is, made an area where neither white nor black people could live).

4. What happened? In brief, ‘they gave it back’. That is, as a result of the Committee’s recommendations, the territory entered a period of black jurisdiction, given back by the colonial government to the people who had previously lived there. Also, the Cape Governor of the day, Benjamin D’Urban, was recalled (basically, sacked) as a consequence.

5. The engraving shows the men in an antechamber (a back room) in the House of Commons in London, with various of the documentary evidence and in particular the maps that they were speaking to shown in the box in front of the table, with others on the table top.

7. Jan Tzatzoe was a Christian convert, and an elder son in a minor branch of the ruling Xhosa hierarchy in the Eastern Cape. In western terms, he was cadet branch royalty. James Read the father was one of the first LMS missionaries to work in South Africa. His son James, whose mother Elizabeth Valentyn was a Khoi woman, was also an ordained LMS missionary and a leading figure in the Kat River Settlement. Andries Stoffels was a church Deacon in the Kat River Settlement. Dr Phillip was titular head and main administrator of the LMS missionary presence in South Africa.

8. Consider the dynamics of this group, in terms of how they are depicted in relation to each other and also in relation to the onlooker. This is helped by removing identity in the sense of de-facing them, so that what remains is the arrangement of bodies and heads and eyes. 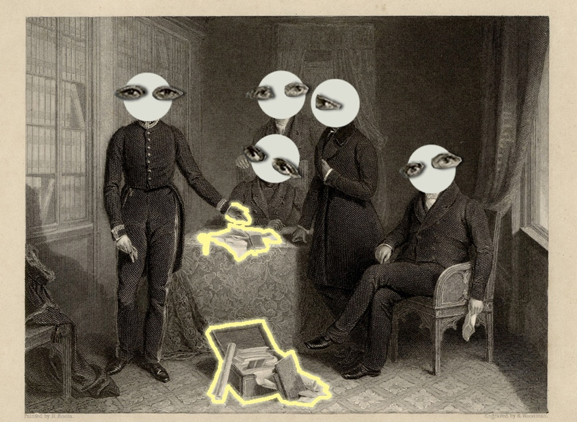 9. The main focal point of the group is Jan Tzatzoe, who is stood erect and in uniform, and he stares out at the onlooker looking at him. He is the only figure in the engraving who is shown in a moment of action – he is gesturing towards the documents on the table and the eye of the onlooker goes from him to where he is pointing.

10. James Read jnr and Andries Stoffels have their heads turned away from the onlooker and are both looking directly at Jan Tzatzoe; they are not attending to the onlooker at all, thereby confirming him as the main focal point. James Read snr is looking out at the onlooker but he is at the back of the group and half obscured. John Philip is the other man present who is looking very directly at the onlooker, in his case with what looks like a document in his left hand held downwards. He is a second focal point, but is depicted in a moment of stasis.

11. Through this act of de-facing and removing knowledge of represented skin colour, what is seen?

12. The tall figure on the left of the engraving as the onlooker sees it is a commanding presence, in terms of his height, erectness of bearing, his uniform, his action in pointing out to the onlooker where to look, and his directness of gaze. This is confirmed by the presence within the engraving of the two people looking at him. They have eyes only for him.

13. One of the other figures is almost inconsequential, standing at the back with his head slightly turned. The other seated man is different, for his direct gaze out gives him a presence, while that he is holding a document bestows a kind of authority, in referencing the documents on the table and also those in the box in front of the table, all of which are signalled as important.

15. What about the colour line?

16. Regarding those shown in the engraving who are not white, for James Read jnr and Andries Stoffels the main presence is Jan Tzatzoe, and he is the person shown in a moment of action. They look at him, they are indeed intent on him. They are unconcerned with what else is going on. And for the onlooker, too, there is a similar immediate draw of the eye to Jan Tzatzoe.

17. Is this a case of exoticism, because he is an African man? Clearly it is not so simple, for the same thing does not happen with James Read jnr or Andries Stoffels, and also they are even more wrapped up in him than the onlooker is likely to be. That is, the eye of the onlooker at some point also turns to the other figures in the engraving, and it falls upon John Philip and what he holds as well as his gaze out.

18. The engraving, now often reproduced as the picture alone, originally came accompanied by the words shown at its bottom edge. It was published by Fisher, Son & Company. It is generally referred to as a line and stipple engraving and was made in 1844. The legend at the bottom of the engraving reads,

giving Evidence before the Committee of the House of Commons

19. So what might this add up to, concerning how the onlooker sees the engraving and the men depicted in it? How to read the colour line with this in mind?

20. The order of the names is interesting, for this does not follow the seating arrangement, but begins with the only two of the men who are provided with personal names, while the other three are referred to with titles. This is not in a simple way just because these two are black and so about a colour line, for James Read jnr is referred to by title along with his father, and in correspondence of the time he is described as being very dark-skinned. But the ‘foreign’ (though in different ways) ethnicity of both Tzatzoe and Stoffels is indicated by their names, while Rev Read jnr could be more easily glossed because of his, so perhaps this is the explanation.

21. How to read the colour line regarding the subject of the engraving?

22. This is in part a matter of lines on paper, crucial and consequential lines regarding how the maps and perhaps also title-deeds shown had divided up land and assigned its possession or dispossession to this group and that. In the eyes of the colonial authority, the map lines and the other documents bestowed or usurped possession and constituted legitimate borders which would govern its conduct on the ground.

23. It is also in part an acknowledgement that there had been unacceptable conduct on the part of the colonial power in the past in drawing such lines. What the engraving shows, looked at in this light, is that moment in time when the abolition of slavery was much in the air, Buxton as chair of the committee that the men were giving evidence to was very involved in this along with other family members, and the ‘Aborigines Protection Society’ was being formed and operated in a relatively radical way in its first period.

24. The year 1837, and the few years immediately before and after it, was still a time when some things about race and dispossession could perhaps have become different. For a shimmering moment it seemed that this would come about. The moment is represented in this engraving. The moment passed.

Elbourne, Elizabeth. “The sin of the settler: the 1835-36 Select Committee on Aborigines and debates over virtue and conquest in the early nineteenth-century British white settler empire.” Journal of Colonialism and Colonial History 4, no. 3 (2003).