Please reference as: Liz Stanley and Andrea Salter (2014) ‘Trialling the WWW database and recording template’ Whites Writing Whiteness www.whiteswritingwhiteness.ed.ac.uk/overviews/trialling-the-www-database/ and provide the paragraph number as appropriate when quoting. [This has been adapted from the blog post ‘From Gottlob Schreiner to Cecil Rhodes via the Cape Colony Letters: The development of the WWW Project database’, dated 26 September 2013.]

1. We have put a lot of time and effort into designing and then piloting a template for recording our work on letters and collections. It’s been important to get this right because it obviously impacts on the entire WWW database of collections – and this in turn governs our research, and also that of possible future users of the data we’re collecting. This is because the database and its contents underpin the VRE or Virtual Research environment we’re using to store, display, data-manage and aid analysis of project data; and it will eventually also underpin the ‘user interface’ that will enable other people to make use of our published research materials.There have been three trials of the database, which as a result of such a thorough succession of workouts has not so much developed as come on by leaps and bounds. 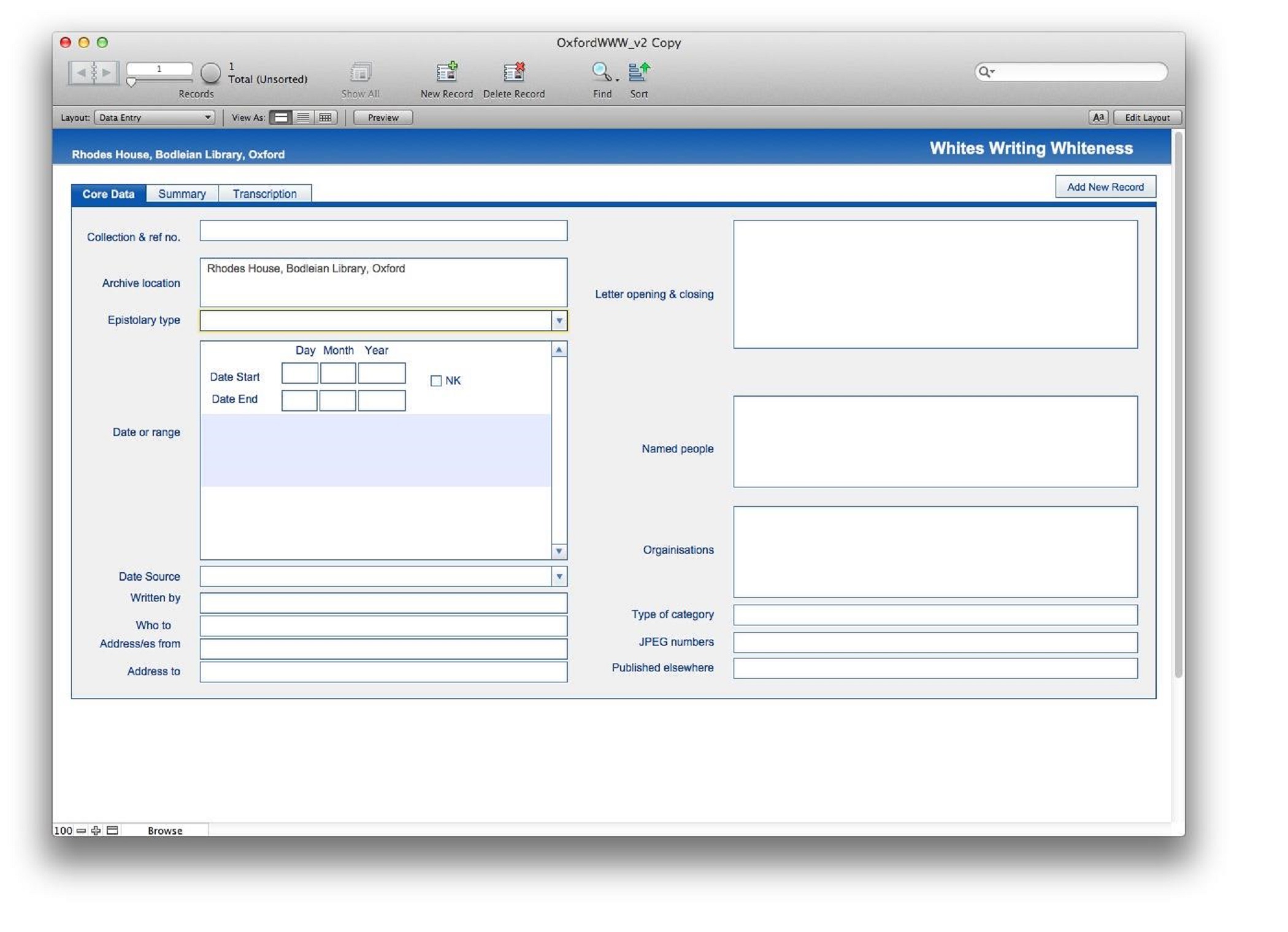 2. The first trial was to log and record ‘core data’ for the relatively small number of Gottlob Schreiner letters to his then-employer the London Missionary Society, also summarise these, then transcribe them in full (nb. the stupendously rich and large LMS collection is archived in special collections at SOAS, University of London). The various elements of the database are shown in Screenshot 1 above. As a result, quite a lot of the core data recording tools were changed or expanded, some were automated by having pull-down menus added and others by having default information in them (eg. ‘letter’ in Epistolary Type).

3. The second involved working on something a lot larger, a set of nearly two hundred letters covering the period from the 1790s to the 1870s known (rather misleadingly) as the Cape Colony Letters (nb. these are part of special collections, Bodleian Library, University of Oxford). As a result of this, we abandoned some aspects of the core data (letter opening and closing being the main thing), and also added some tools that help when letters are being transcribed – the underline, strikethrough and insert tabs near the top left on Screenshot 2 below. 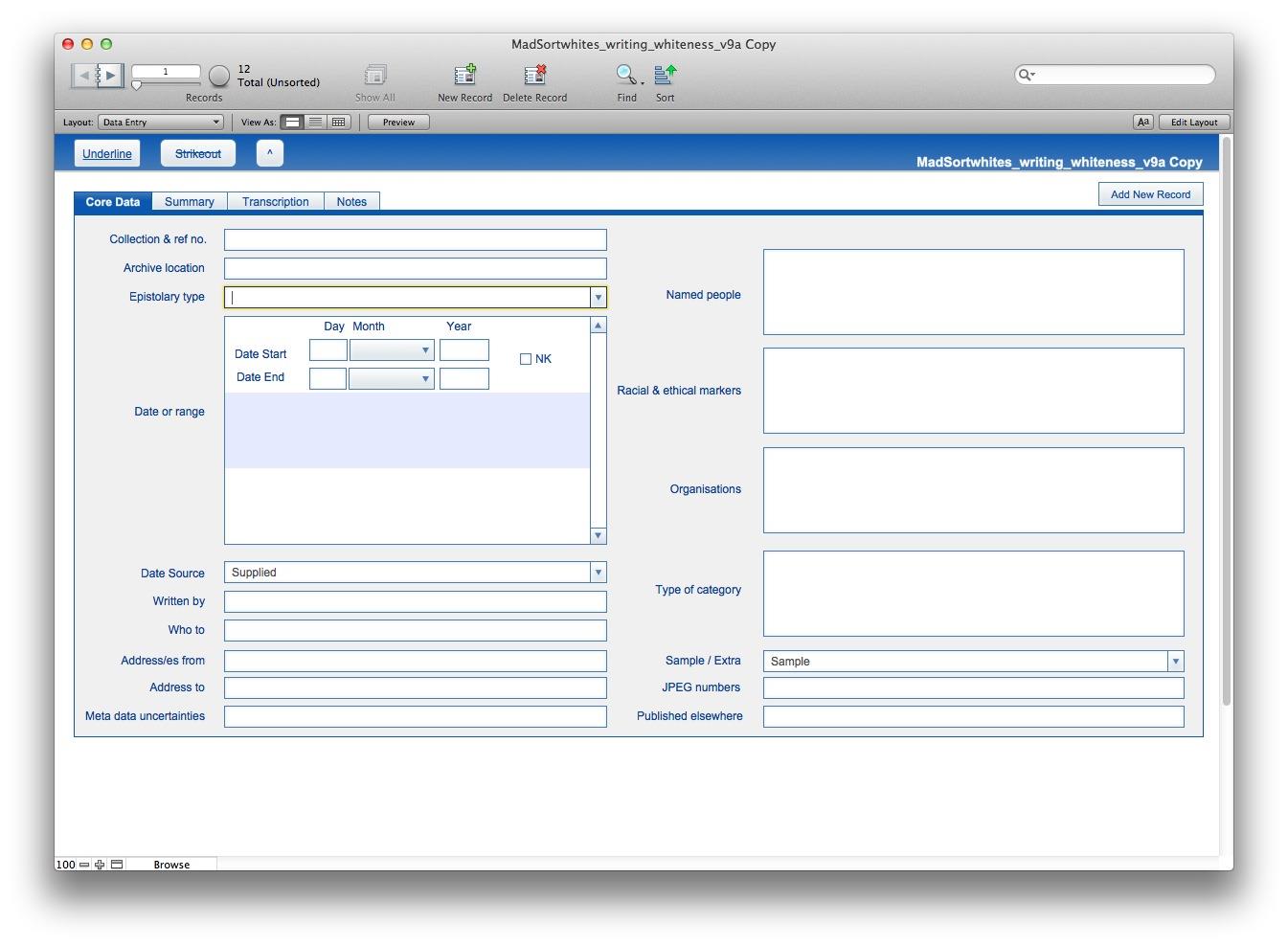 4. And as this version of the database evolved (through v8, to v9 and various extensions of v9), so we then added the capacity to record information about race and ethnic markers used in letters, and a Notes page, following the Core Data, Summary and Transcription pages. We also increased the font size all round – the original size left the user with a pounding headache and screwed up eyes at the end of an archive day!

5. There was then, concurrently with the final stages of working on the Cape Colony Letters, a further third trial of the database, with a number of  further extensions made, through v9 to a number of developments of v10. This trial concerns a mammoth collection of perhaps around 5000-6000 sometimes very extensive documents and linked sets of documents, the Rhodes Papers (nb. these are part of special collections, Bodleian Library, University of Oxford). 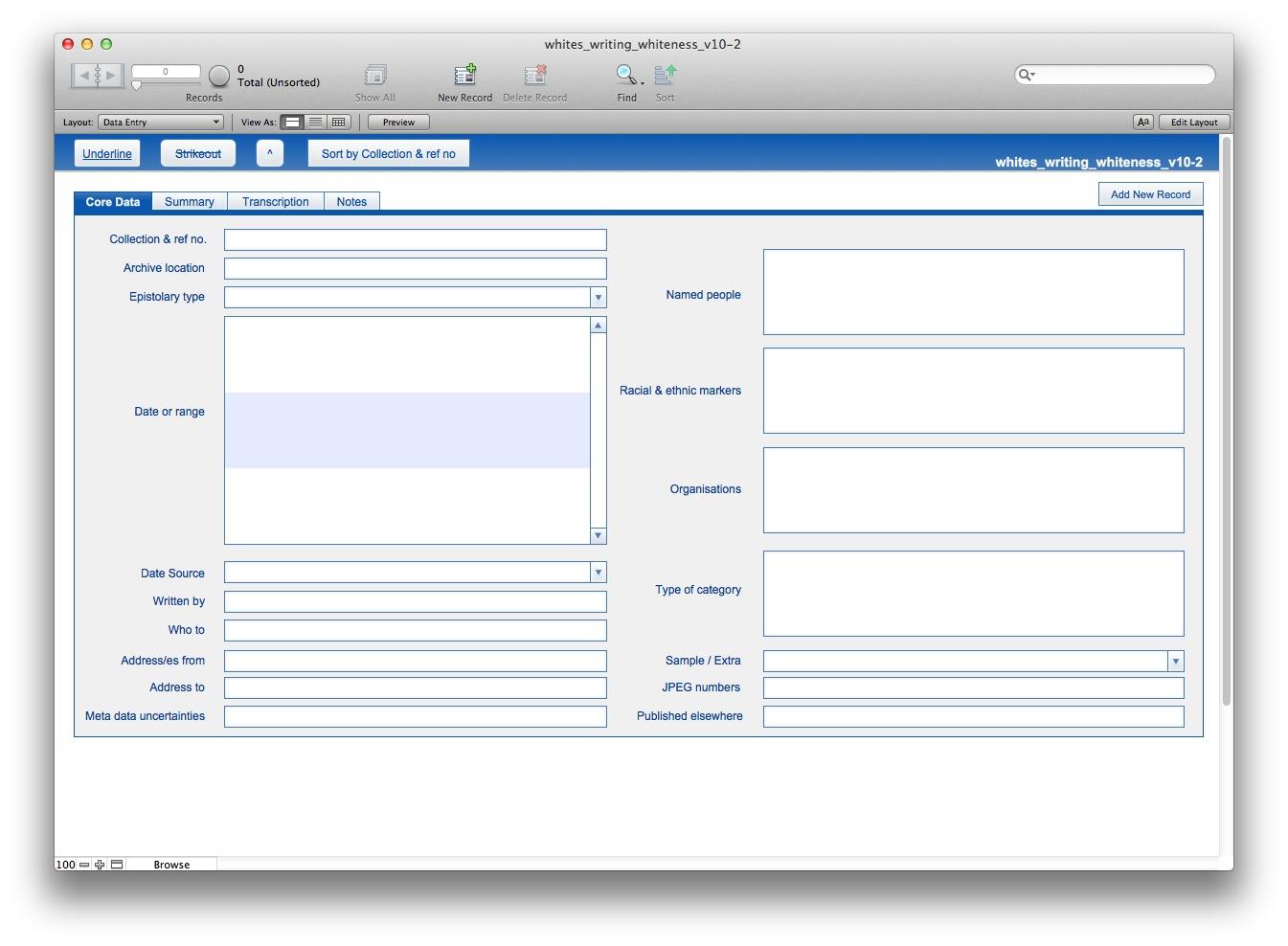 6. The early stages of working on the Rhodes Papers led to some further modifications and extensions, with the current version – the last we hope – shown in Screenshot 3 above as v10-2. This now has a nifty sort function, so we can record items as they are in an archive, which is in a sometimes muddled order, but then re-sort them into a strict numerical succession when wanted. And it also has an enhanced capacity to record multiple and complicated dates.

7. Work has followed on three different archive collections, with some further modifications of the recording form, which has now reached its final form (we hope!) in v15.1 with a slightly different version used for working with diaries.