The earliest letter ever discovered in Britain!

In the UK news on Wednesday 1 June 2016 were reports of excavations at a major site in London that have uncovered Roman buildings, roads, and large amounts of other material including many letters and other documents. One of these is the earliest letter written in Britain, as far as Roman findings to date establish. Many of these items, which have been found  in an archaeological dig at the building site of the Bloomberg headquarters and nearby the site of the Roman London Mithraeum, will be on show on site from October 2017 on. The publicity arose from the publication of a book by Roger Tomlim on the writing tablets that were found during the excavations and which hace been subsequently preserved, transcribed and translated. 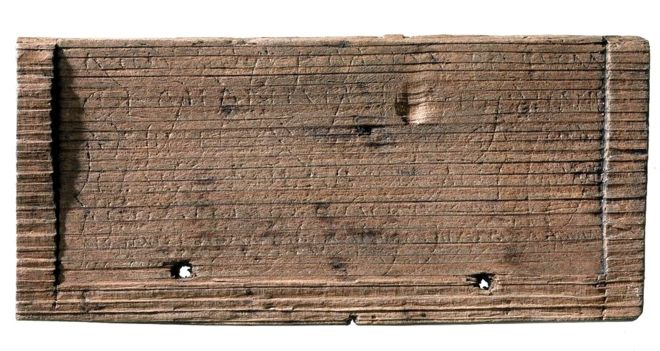 The documents including letters are on wooden tablets covered in beeswax, and there are over 400 of them, with some 87 having been deciphered to date. The earliest letter, dated to AD 43-53 and shown in the photo, concerns those perennials of money and reputation – “…because they are boasting through the whole market that you have lent them money. Therefore I ask you in your own interest not to appear shabby… you will not thus favour your own affairs….”

There will be more on Roger Tomlin’s book on the writing tablets in a later blog. And for more generally on this amazing set of finds, which will eventually have as much impact as the Vindolanda letter tablets, please click here.