Please reference as: Liz Stanley (2017) ‘Seeing Soweto 1976, Re: Seeing Sharpeville 1960’ http://www.whiteswritingwhiteness.ed.ac.uk/Traces/Seeing-Soweto-1976-re-Seeing-Sharpeville-1960/ and provide the paragraph number as appropriate when quoting.

1.1 For many, the word ‘Soweto’ has a particular set of meanings associated with it, in standing for the evils of apartheid; and these meanings are in particular attached to photographs from June 1976 which have taken on the properties or characteristics of what Cornelia Brink (2000) calls secular icons. And by ‘many’ here, of course there needs to be recognition that this will be viewed differently in South Africa by those who live through or inherited these events, as compared it with those of us looated

1.2 These 1976 photographs are of something which over the last forty years has variously been described as the Soweto protest, riot, massacre and uprising. And over this time some photographs more than others have provided the generally dominant imagery taken to signify the whole, as scanning through the huge number of books and other publications on these events will indicate. What now stands metonymycally for the whole and for representing the essential meaning of those events is perhaps more than any other image a photograph of the dead Hector Pietersen being carried in a friend’s arms with his sister walking beside them crying.

1.3 In this regard, consider also the sequence of photographs shown below. In a small way this enables the death of Hector Pietersen to be placed in the wider context of the events occurring on that day and over the period immediately before it. 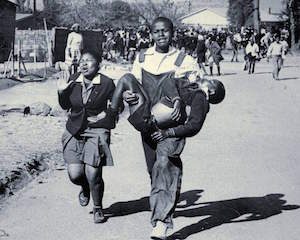 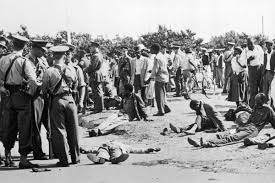 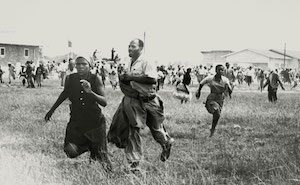 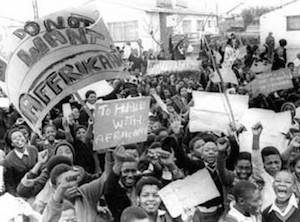 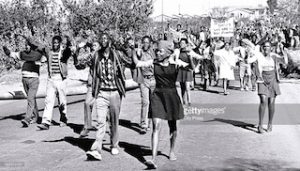 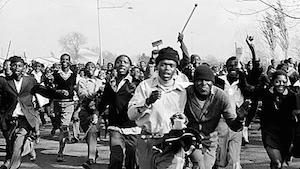 2.1 A ‘secular icon’ is an image that comes to stand metonymycally for something wider than the specifics represented within and by it; and it relatedly takes on hallowed status as representing ‘the facts’ in an almost unchallengeable way. Brink is interested in the process by which such secular icons come into being and their effects, and is particularly interested in this in relation to the Nazi labour and extermination camps. These are now mainly seen via a small number of photographic images of actually atypical circumstances, usually of Belsen, an extermination rather than a labour camp, and in the later stages of the war when people were starving rather than being immediately gassed or, another outcome, being put to work.

2.2 Secular icons are representations which inspire strong emotion. They are seen to stand for an epoque or set of values or some other system-level phenomena, but they are not merely symbolic and do not simply allude to something outside of them, because they are viewed as intensely representing their subjects and seem to provide an instant connection to a deeply meaningful moment in history and to transcends the specifics shown.

2.3 At basis, these photographic representations come to be seen as an authentic version of the thing itself, not so much a copy, and not so much a representation, and more as having a particular kind of immediacy that connects the viewer with the eventness of what is seen. Brink comments that, as a trace of the past, a secular icon has a special kind of ‘traceness’ – whatever is ‘in’ such a photograph is not seen as re-presenting but as a trace of the thing itself left on the surface and, as she notes, this is what Barthes refers to as a photograph being an ’emanation of the referent’.

2.4 And for Brink, a secular icon can be distinguished from documentary images more generally because they usually provide no sign of the specific time and place and persons that are background to whatever is foregrounded in them, with any people represented in them usually losing individuality by becoming seen as representing something vastly larger in a moral sense. At the same time, recognising the processes at work here does not mean denying the facts which the photograph seeks to represent. And as she concludes by saying, ‘the ambiguity of photography does not exclude the struggle for accuracy. Both of these elements – what a photograph shows and what the viewer sees – are part of the photograph’s history’ (p.148).

3.1 Over time there has been a depoliticisation, or more strongly a bracketing, of the events in Soweto in June 1976 which happened immediately before the police opened fire, political events involving marches and demonstrations and gatherings which various of the photographs shown above provide glimpses of. People were on the move, were in political action. However, what has come to predominate is instead an emphasis on the eruption of police violence and the victim status of those who died, most of them shot fleeing, many of them children and adolescents. And this is strange because it assigns, or rather re-assigns, power and agency to the state and its apparatus in the form of the police and their actions. The police acted, so it goes, while the other people were in response mode: they were shot, they fled, more were shot, many died.

3.2 For many non-South Africans, it has been only fairly recently that these matters have been returned to a reformed political consciousness, one where the fully agentic presence and activities of the black people engaged in political protest on those fateful days in June 1976 has been recognised. This is certainly in no way to diminish the appalling things that happed. Indeed it is the reverse: it is to restore a fuller meaning, that the reponse came from the police et al, while the agency that occasioned this response came from political movement.

3.3 The power of imagery, of representation, is not total, and nor is it the only thing that underpins how major events of the past are recollected and understood. But it does play a role in what memory is seen to be. And here it is notable that one photograph more than any other has come to stand as a metonym for the whole and its meaning, certainly for people outside of South Africa. This is the much replicated photograph shown here and referred to earlier:

3.4 This photograph shows something quite terrible, the raw immediacy of the grief and despair of a sister crying and a friend carrying the dead body of Hector Pietersen, a young boy who was shot and killed in the Soweto events. It is very powerful in calling to the humanity of the viewer to empathise with all three of the key figures depicted. And its immediacy, that this is precisely the captured moment in which these terrible things happened, is an important part of its effect. There is something in addition, which plays on symbolism and intertextual referencing. It can be more readily be seen, firstly by looking at and seeing the other people present in the background of this photograph and recognising that this was not about individuals but about a group and a social category and the politics surrounding this. And then secondly by contemplating another photograph, which has over time overtaken many photographs of other aspects of the killings to become one of the dominant images standing for the March 1960 Sharpeville massacre. 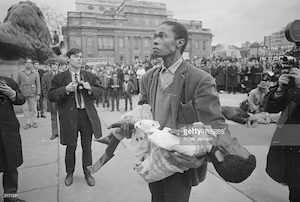 3.5 Ironically, as looking closely shows, this is not ‘really’ a photographic representation of a moment in the events that happened at Sharpeville, but is a later fabricated image constructed to make the point. It makes the point by playing on the same imagery that comes into mind regarding the photograph of Hector Pietersen. It shows a child held in a man’s arms and has been photographed on a public protest occasion in Trafalgar Square in London, and the photograph has been multiply reproduced world-wide and typically appears under the heading of ‘Sharpeville’.

3.6 Most people when seeing this photograph focus on what they see as a man who is a father holding the dead body of a child seen as his son. What is not seen, but becomes so once it is pointed out, is that the child is made of cardboard and that what is represented is not ‘real’ and was not intended to be seen as such but as a symbolic representation. Told of this, often people can take a moment or two to ‘readjust’ what it is that they think they have seen. It is nonetheless very powerful, so powerful indeed that the meaning associated with it makes it difficult for people to see that the ‘child’ is actually a cardboard figure, with a double-take needed for this to sink in. 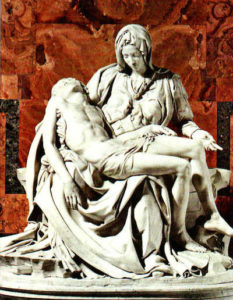 3.7 The imagery that comes to mind is that of the Pieta: a mother, Mary, grieving and holding the draped body of her son, Jesus, under the sign of pity. A dead child held in loving arms by those who grieve, and doing so in that moment of immediacy, is a deeply powerful image and calls up empathy and human fellow-feeling. It has also become a de-politicised though still powerful image, in the case of the Pieta in stripping away Roman occupation and rule, the activities of Governors, military reprisals against notable dissents, state violence against an oppressed populace, and via this condensing matters to the human content seen more narrowly.